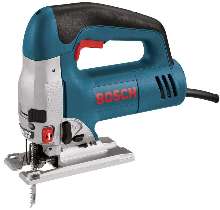 Mount Prospect, Ill., February 9, 2004 -Today, Bosch Power Tools and Accessories, a division of the Robert Bosch Tool Corporation, unveils its much-anticipated new jigsaw to the construction market at the annual International Builders' Show in Las Vegas. For the first time, users will get a chance to see and use the new saw with its precision control blade guide and one-touch blade change systems. Building on the heritage of the Bosch jigsaw, this tool outlasts and outperforms the competition in every aspect.

The North American jigsaw market in 2002 brought in revenues over $38M with Bosch commanding the largest percentage of that share. Maintaining its leadership position with more than 39 percent of the jigsaw market, Bosch is prepared to grow its share with the new 1590EVSK jigsaw.

The new saw, an upgrade from the world's number one selling jigsaw - the Bosch 1587 - offers a host of features that make it stand out from the competition. The new precision control blade guide system, one-touch blade change system and tool-less foot bevel proves that Bosch engineered this tool with accuracy and power at the forefront.

The principal feature on the new Bosch 1590EVSK is the Precision Control Blade Guide System that virtually eliminates blade wander on the tool. In addition to the industry standard Bosch patented T-shank three-point blade holder, present on all Bosch jigsaws, this new system incorporates an additional clamp to grasp the blade lower for added stability. This new system ensures greater accuracy by providing less blade wander in the workpiece. For example, when turning corners in a large piece of wood, this system protects the integrity of the cut and allows for much straighter cut lines and cross-sections. The addition of this new system makes the jigsaw the most precise on the market.

Understanding that professionals appreciate devices that allow quicker and easier blade changes, Bosch developed its first one-touch blade change system and incorporated it onto the cordless jigsaw in 2002. Now, with the introduction of the 1590EVSK, the one-touch blade change system is also available on a corded model. This system provides simple one-handed insertions and a durable, long-lasting lever blade ejection switch for easy blade removal. Hot and broken blades are no longer an issue.

The new jigsaw comes equipped with a tool-less foot bevel that allows users to make adjustments up to 45-degrees with the quick lever action. On many competitive jigsaws, as well as older Bosch models, the bevel foot can only be adjusted with a wrench. The new lever with its built-in tension dial makes bevel changes easy and accurate for all users.

Features abound on the new Bosch jigsaw including constant response circuitry, which provides a soft start for easy cut line alignment, and special electronics that eliminate stalling in hard materials. Weighing six pounds and boasting the largest motor on the market at 6.4Amps, the new Bosch jigsaw is both lightweight and powerful. The variable speed trigger with dial allows for variations in the speed of cut between 500 and 2,800 SPM and an engineered four-stage orbital action adjusts the blade motion to match the workpiece and cutting task. Additionally an on/off blower switch connects directly to the vacuum port for efficient dust removal, while the bevel foot is cast with exceptionally legible scales.

The new jigsaw comes standard with the following equipment: one T144DP Blade, T123X and T244D Blade, both for use in wood; a zero clearance insert; non-marring footplate and carrying case. A barrel grip version of the jigsaw will be available in September 2004.

About Bosch Power Tools and Accessories
Bosch Power Tools and Accessories is one of the divisions within the $1 billion, 5,000 employee strong Robert Bosch Tool Corporation, which is the North American branch of the largest power tool and accessory manufacturer in the world, Robert Bosch GmbH. Bosch Power Tools provides a complete line of corded and cordless power tools and accessories that have been engineered to survive any jobsite and allow professionals to take control of their work. For more information, call toll free 877-BOSCH-99 (877-267-2499) or visit www.boschtools.com.
Share