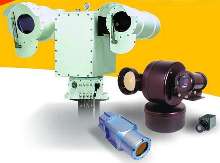 September 15, 2003 - Goleta, CA - Indigo Systems' newest infrared (IR) camera family, Luveo(TM), is designed to meet the rigorous demands of the security and surveillance industry. Luveo thermal imaging cameras are configured to meet short, medium, and long range surveillance requirements. Powerful system capabilities are tailored for ease of integration by prime systems integrators. They are ideally suited for border, coastal, perimeter, and high value facility security. Each Luveo system includes an Indigo IR camera, a companion visible camera, a suitable pan/tilt, and the powerful Luveo Integrated Command and Control System with local server. Designed as an outdoor all-weather system, the cameras are housed in environmental enclosures to a minimum of IP-66.

Linked by built-in networking capability, Luveo's multiple camera subsystems of different detection ranges can be controlled by a single remote console over an IP network. This flexible subsystem interface is a solution for system integrators requiring a network centric C3 architecture. Georeferencing, radar slew to queue, and auto video tracking are some of the other features available to the prime system integrator from the Luveo surveillance camera subsystems.