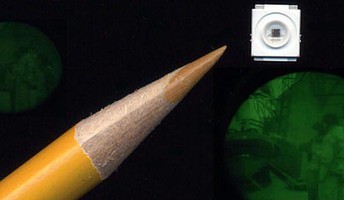 
The new BIR Series is available in a CCD-Optimized 850nm peak wavelength and a typical output power rating of 45mW/sr at an industry leading 120º viewing angle.

Chino, Ca. August 4, 2006 - American Bright Optoelectronics Corporation introduced the BIR-PP8-DSS-1 NovaLED IR emitter that has been designed specifically for CCD based imaging applications such as machine vision, security, military, night vision and advanced automotive applications. The miniature package delivers one of the industry's greatest outputs at 45mW/sr @ 500mA at the industry's widest viewing angle for such a device: 120º. Measuring a diminutive 0.236 [6.0mm] x 0.236 [6.0mm] square and standing only 0.060 [1.5mm] high, the BIR series is also ideally suited for compact, portable and handheld devices.

The rugged packaging design of this reflow solderable surface mount device allows for use in industrial, military, medical and automotive applications that are subject extremes shock and vibration. Extended thermal operational limits of -40ºF [-40ºC] ~ +212ºF [100ºC] contribute to the BIR series suitability for use in all environments. The BIR series also boasts a 2kV electro static discharge (ESD) threshold.

The BIR series is shipped on industry standard 330mm tape and reel in 2000 piece quantities (smaller quantities are available by special request) and is compatible with all industry standard assembly methods including RoHS compliant Pb-free IR-reflow processes that meet JEDEC J-STD-020C. The BIR-PP8-DSS-1 is RoHS and WEEE compliant.

"The new NovaLED BIR series is an advancement in the state-of -the-art for CCD based imaging," said George Lee, President of American Bright Optoelectronics Corporation. "When you couple the high power output with the wide viewing angle you open up some extreme design possibilities that where previously only feasible with arrays of multiple diodes".

The BIR-PP8-DSS-1 is available from stock and is priced from under $3.99 each in 1000 piece quantities. Limited samples are available to qualified customers. Please contact the factory for further information toll free at 1-888-533-0800, or visit American Bright online at www.americanbrightled.com.