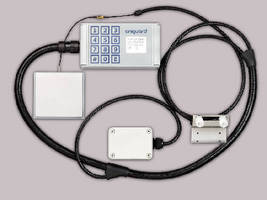 Designed to protect drinking water distribution systems against intentional contamination, CNIguard(TM) utilizes Smart Sensing Technology to detect tampering such as drilling, grinding, and cutting, while virtually eliminating false alarms. Wireless computerized system can distinguish between real threats and common occurrences such as heavy rain and hail. Radio signals, which are encrypted to prevent hacking, are used to communicate between controller and detectors mounted to access points.


NEW HAVEN, CT/ - The Bilco Company is pleased to announce a new partnership with CNIguard, a United Kingdom-based manufacturer of intrusion detection systems for access points in water treatment facilities. CNIguard serves North America from an office in western Pennsylvania and Bilco will now act as the exclusive distributor for this innovative wireless security system in the United States and Canada.

"With successful performance of initial installations at United States water facilities, we envision that via Bilco, infrastructures at large will embrace the enhanced standards of security uniquely offered by CNIguard," said Dr. Edward Klinger, CEO of CNIguard.

Bilco's CNIguard(TM) intrusion detection system is specifically designed to protect access points in drinking water distribution systems against the threat of intentional contamination. The system utilizes a patented Smart Sensing Technology to detect tampering such as drilling, grinding and cutting, while virtually eliminating costly false alarms. The computerized system has the ability to distinguish between real threats and common occurrences such as heavy rain, hail, etc. and is rated for a maximum of one false alarm per year. Unlike video or audio surveillance systems on the market, CNIguard does not rely on human interpretation to determine if a threat is real.

"The construction industry has always looked to Bilco for specialty access solutions and we are pleased to offer a security system for our access products as well as other access points in a facility," said Tom Crowley, Vice President of Sales & Marketing for Bilco's commercial product line. "We are very excited about this partnership and our ability to now provide a highly engineered security solution to the market."

The CNIguard intrusion detection system installs easily on any access point and is ideally suited for pumping stations and wells in remote areas. The system consists of a controller and a series of detectors that are mounted to access points throughout a water treatment facility. Radio signals, which are encrypted to prevent hacking, are used to communicate between these devices. The controller is hard wired into a facility's main power supply and connected into a standard SCADA monitoring system. Detectors are powered individually by lithium batteries and are designed for the integration of commercially available sensors to monitor operational requirements such as flooding and temperature and pressure changes if required.

"Installation costs for traditional cable based security systems can be quite expensive as a conduit must run throughout a facility," explained Crowley. "The CNIguard system eliminates this expense, making for a faster and less costly installation."

Currently installed in water treatment facilities in the United States and throughout the United Kingdom, CNIguard has been tested and approved by the United Kingdom Security Services. The product is also designated as Anti-Terrorism Technology as part of the U.S. Department of Homeland Security Safety Act.

For 85 years, The Bilco Company has been a building industry pioneer in the design and development of specialty access products. Over these years, the company has built a reputation among homeowners, builders, architects, and engineers for products that are unequaled in design and workmanship. Bilco - an ISO 9001 certified company - offers a line of roof hatches, automatic fire vents, floor access doors, and basement access products for residential applications. For more information, visit www.bilco.com.
Share