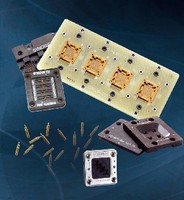 IDI interposers have a remarkably low cost of ownership beginning with their initial cost. The interposer consists of a plastic assembly containing IDI's proven semiconductor probe technology. Combined with an easy to design and fabricate load board, interposers require minimal attention throughout their extended life cycles.

WLCSP interposers are now available for use and feature several other significant benefits including:

IDI is a leader in the design and manufacture of custom interconnects including high performance test sockets for the semiconductor industry and product connectors for the medical, military, aerospace, and telecommunications industries. For more information contact IDI at (913) 342-5544, visit our website at www.idinet.com (for probes and connectors) or www.synergetix.com (for test sockets).
Share