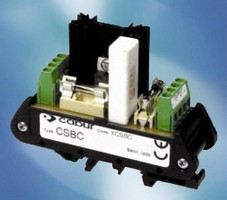 Used as protective interface between battery and power supply, XCSBC Battery Charger Interface Module is rated for power supplies from 1-10 A. It is mainly used for DC backup so that battery acts as backup in case of power failure and power supply provides trickle-charge for battery to remain fresh. Occupying 1 in. of space on DIN rail, module features protection diodes, charging current limiting resistor, and protection fuses for battery.

Rated for power supplies ranging from 1 to 10 A, the XCSBC Battery Charger Interface Module features protection diodes, charging current limiting resistor and protection fuses for the battery. The diode provides decoupling between the battery and the power supply while the resistor circuit limits the current charge to avoid overheating the battery thereby extending the life. In addition, the fuse circuit protects the battery and its wiring against short circuit. It is also possible to use these modules to connect two power supplies in parallel. The double diode can be used as oring diode for decoupling two power supply outputs.

The XCSBC Battery Charger Interface Module is mainly used for DC backup situations so that in the event of power failure, the battery acts as a backup. A unique feature of the XCSBC is that the power supply provides a trickle-charge making it possible for the battery to remain fresh unlike other battery chargers that quickly wear down. The ASI Battery Charger Interface Module is a low-cost reliable means using your power supply as a charger in those applications where you have battery back-up.

For more information on these unique and cost effective Battery Charger Interface Modules and the equally as efficient power supplies that we offer, please contact ASI at P.O. Box 1230, Carlisle, PA 17013, by calling toll free1-877-650-5160, or by visiting their website at www.asi-ez.com. The ASI website has all of the technical information on this unique product along with "Special Internet Pricing."