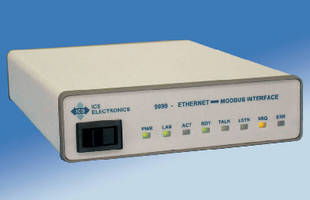 Housed in Minibox case that can be rack mounted in 1U high space, Model 9099Â enables users to controlÂ Modbus RTU devices over company network or over Internet. As VXI-11 Interface, unit lets user send simple read-write messages over network to control and query slave Modbus devices. As Modbus TCP/IP to Modbus RTU converter, 9099 provides transparent data path from any PLC or PC with Modbus TCP/IP capability to Modbus slave device. Conversion from VXI-11 to Modbus TCP/IP protocol is automatic.

Model 9099 Ethernet to Modbus Interface Board Announced By ICS Electronics


PLEASANTON, CA, -- Today ICS Electronics announced a new Ethernet to Modbus Interface for controlling Modbus RTU devices over a company network or over the Internet.  Called the Model 9099, this new Interface allows Temperature Chambers and other Modbus controlled slave devices to be controlled like a VXI-11.3 or LXI instrument.  The Model 9099 also operates as a Modbus TCP/IP to Modbus RTU Converter and gives a user control of the Modbus slave device from any web browser.  Typical applications for the 9099 are interfacing Temperature Chambers, Temperature Plates or other Modbus RTU slave devices so that they can be controlled from standard test programs or industrial PLCs.

ICS's Model 9099 Ethernet-to-Modbus Interface is an Ethernet to Modbus RTU Interface that gives a user three ways to control Modbus RTU slave devices and adapt Modbus slave devices to an TCP/IP (Ethernet) Network.   As a VXI-11 Interface, the 9099 lets the user send simple read-write messages over the network to control and query slave Modbus devices.  The 9099 does all of the Modbus RTU packet formatting and handles the response packets.  The 9099 has both RS-232 and RS-485 interfaces so it can be connected directly to a single Modbus slave device or it can be connected to multiple Modbus devices via an RS-485 network.

The 9099's WebServer includes a Control Page that lets the user enter the 9099's read or write commands from any web browser to control the Modbus slave device.  Device responses, Modbus status and error conditions are displayed for the user.

The Model 9099 is a VXI-11.3 compliant Instrument.  VXI-11 is a communication standard developed by the VISA consortium in 1995 in conjunction with the VISA Specification.  VXI-11.3 is a sub-standard that covers TCP/IP-to-Instrument servers like the 9099.  The 9099 generally complies with the LXI Specification for core instruments and is fully VXI-11.3 and IEEE-488.2 compliant.

The 9099's VXI-11 compliance means that it can be easily controlled from virtually any computer.   On WIN32 computers, the 9099 can be easily controlled through a industry standard VISA layer and integrated into a LabVIEW, VEE, C language, Visual Basic or VB.NET test program.  On computers with Linux, Unix or similar operating systems, the user can control the 9099 with RPC (Remote Procedure Call) calls.  The VXI-11 Specification provides the RPCL information necessary for any Unix/Linux programmer to develop the RPC calls.

The 9099 is easily adaptable by an OEM user to be part of his system.  The OEM can store a custom IDN message and other interface parameters in the 9099's Flash memory.  The user can also alter the appearance of the HTML pages used by the 9099's Web Server to include the user's company name, logo and even modify the HTML page layout.  The 9099 includes two prototype HTML control pages that allow a user to control a Temperature-Humidity Chamber with a Watlow F4 and a Temperature Plate with a Watlow EZ Zone Controller.

The 9099 is RoHS compliant and is housed in ICS's small Minibox case that can be rack mounted in a 1 U high space.  The 9099 is available with a US or universal power adapter with plug for most countries.

ICS Electronics is a pioneer and leader in the design and development of IEEE 488/GPIB, Serial and VXI-11 products.  The 9099 is a second generation of ICS's Ethernet to Modbus Interfaces and provides increased speed and additional functions over the older Model 8099.

VEE is a trademark of Agilent, Palo Alto, CA.