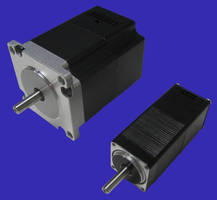 Combining 1.8Â° hybrid step motor with microstep drive and intelligent controller, Accuriss(TM) Series features embedded command language that allows users to execute real-time motion commands or write programs that can be executed with start command, upon power-up, or via input signals. Measuring 1.1 in. across, Accuriss 28 is capable of microstepping up to 1,600 steps/rev, while Accuriss 60 is 2.36 in. across and can microstep up to 51,200 steps/rev.

LAGUNA HILLS, CA, July 10, 2009 -- USAutomation has announced the introduction of the Accuriss(TM) Series of fully integrated and packaged intelligent step motors. Accuriss motors combine a 1.8° hybrid step motor with a microstep drive and an intelligent controller in one easy-to-mount package.

Measuring only 1.1 inches across, the Accuriss 28 is capable of microstepping at up to 1,600 steps per revolution which virtually eliminates the resonance inherent in step motors. The Accuriss 60 is 2.36 inches across and can microstep up to 51,200 steps per revolution. A high level command language is embedded in the controller to allow users to execute real-time motion commands or write programs which can be executed with a start command, upon power-up, or via input signals.

Both Accuriss motors include programmable I/O ports. Communication to the motors is via RS485 and up to 16 units can be daisy-chained together. A USB-to-RS485 converter is a standard Accuriss option to allow users to communicate with standard USB ports.

Three different lengths of each motor are available allowing the Accuriss 28 to achieve up to 11 oz in of dynamic torque and the Accuriss 60 to achieve more than 300 oz in. The Accuriss 28 can be supplied as a standard motor option on USAutomation's Microstage(TM) positioning system.

USAutomation also offers a wide variety of modifications to the Accuriss Series to help customers be able to receive a more ideal solution. These include custom connectors, cabling harnesses, and unique mounting provisions.

USAutomation is a Southern California based manufacturer of machine automation components and systems. With more than 20 years of experience, USAutomation provides innovative solutions to some of the world's top medical, lab automation, and machine design firms.