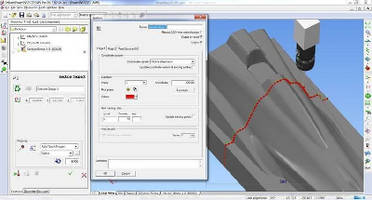 With automated section-measurement functionality, PowerINSPECT 2012 R2 creates probe paths along section of component for comparison of cross-section against CAD model. Users can calibrate probe assembly by probing single point anywhere within measuring envelope. Offset-alignment method aligns part with axes of CMM while setting position with single point measurement. Options within Digitized Curves allow edges, holes, and gaps to be identified as part is being probed.

Improvements to the inspection functionality include a new, simplified procedure enabling users to quickly calibrate the probe assembly by probing a single point anywhere within the measuring envelope; a new offset-alignment method that aligns the part with the axes of the CMM while setting the position with a single point measurement; and new point-cloud options that make it easier to modify and reuse digitised curves and points, with options for editing, deleting and resuming measurement of the points and curves.

The automated section-measurement functionality, which was previously only available in the manual version of PowerINSPECT, is now available in both the OMV and CNC offline-programming versions. This strategy for creating probe paths along a section of the component provides quick and easy comparison of a cross-section against the CAD model. This type of section measurement is important for the measurement of blades and aerofoils, as well as for automotive inspection.

New options within Digitised Curves allow edges, holes and gaps to be identified as the part is being probed. Curves can also be created from CAD models within PowerINSPECT or they can be imported directly from other software packages. All these curves can be modified by rotation, translation, mirroring or scaling, or by editing individual points within the curve.

Once created, curves can be exported as polylines as well as to the previously-available NURBS format. This enhancement is part of a general increase in the ability to export surface and geometric items for use in modelling applications, with VDA export added to the existing IGES format.

The new creation and editing options for curves can be used with a new marking out feature for refining or completing clay models- a requirement for creating automotive and marine styling models. This utility enables curves created within PowerINSPECT to be used to guide a marking out tool on a measuring device or layout machine.