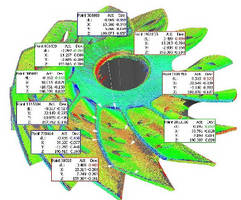 In 2010 version of PowerINSPECT, creation and editing of inspection sequences has been optimized with ability to insert extra points or features anywhere within sequence. Collision checking function offers options to stop sequence automatically once collision is detected and to continue simulation until next problem is found. With version 2010, labels for reporting purposes can be attached to selected points within point clouds generated by laser scanners.


Delcam has launched the 2010 version of its PowerINSPECT inspection software, which offers even easier inspection of parts, tooling and prototypes against CAD data. The system is already the world's leading hardware-independent inspection software, with this new version making it even more attractive to users of all types of metrology equipment, including manual and CNC CMMs, inspection arms and optical devices.

In the 2010 version of PowerINSPECT, the creation and editing of inspection sequences has been improved by adding the ability to insert extra points or features anywhere within the sequence, not just at the end. This will be useful for all users but especially for those creating inspection sequences with larger numbers of measurements. It will also make it easier to update complex sequences during long production runs, when process or design changes require modifications to the inspection routine.

The 'simple measures' functionality included in the previous PowerINSPECT release has been extended in the latest version. The range of pre-defined inspection sequences for common measurement patterns has been increased, and simple alignments have been introduced.

The GD&T Wizard has also been improved and simplified. PowerINSPECT now offers the ability to select features from the CAD view, with item types shown by an icon, making selection easier.

PowerINSPECT 2010 includes improved simulation for checking sequences that are to be run on CNC CMMs or to be used for On-Machine Verification. The collision checking has been made more flexible and easier to use, with options to stop the sequence automatically once a collision is detected and to continue the simulation until the next problem is found.

The ability to reuse measurement results has been extended. PowerINSPECT 6 introduced the ability to create a feature from a combination of other features, for example, to combine the results from a series of circles to create the inspection report for a cylinder. PowerINSPECT 2010 builds on this functionality with the new 'point source' feature which gives the ability to define these relationships offline. This improves consistency for batch measurement, with the measurements being able to be reused in the same way for every component.

Finally, labels for reporting purposes can be attached to selected points within point clouds generated by laser scanners. For example, the user could highlight in the report the points that are furthest out of tolerance or could identify critical points in the design for detailed reporting.
Share