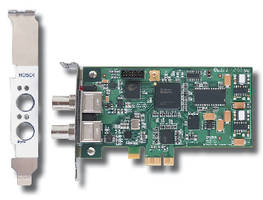 San Diego, CA -- DVEO, the broadcast division of CMI, is now shipping their newest SD-SDI and HD-SDI input or output card targeted for use in video servers and workstations.

On board DDR memory and a proprietary firmware design are used to buffer the transmit data to account for system latency as the data flows from the PCIe bus.

The input features for the HD-SDI Master I or O PCIe LP include automatic standards detection between 720 and 1080, automatic cable equalization, and input monitoring of CRC errors. The output mode features tri-level sync input for transmit frame and rate synchronization, so transmit streams can be synchronized with other HD/SD-SDI streams for switching, editing and overlays.

"We're proud to help broadcasters, production companies, and corporate media departments meet the fast-growing demand for HD content," said Laszlo Zoltan, Sales Manager for DVEO. "Our HD-SDI Master card is ideal for HD-SDI servers, post-processing, capturing or sending HD or SD video, and electronic news gathering. And because it can switch between receiving and transmitting, it is an excellent value."

The new single channel HD-SDI card will be featured in Europe at the International Broadcasting Convention (IBC) in Amsterdam, September 11-15, at Stand 2.C33.

o Receives or transmits uncompressed HD/SD-SDI at bit rate up to 1.485 Gbps

o Handles up to 8 channels of embedded audio

DVEO and HD-SDI Master are trademarks of Computer Modules, Inc. All other trademarks and registered trademarks are the properties of their respective owners.

For more information on CMI and DVEO, please contact Rebecca Gray at +1 (858) 613-1818 or rebecca@computermodules.com. To download DVEO's press releases and product images, visit the news section at http://www.dveo.com/.
Share