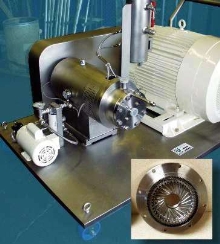 The MegaShear design consists of a high tip-speed rotor (11,000+ feet / minute) with several stages of semi-cylindrical grooves machined on the vertical faces of the rotor, running within the confines of a fixed stator with similar grooves on its vertical faces.

As fluid enters the center of the stator, it is subjected to high velocity pumping vanes that motivate the product into the section with the grooves. Within this section, the product is accelerated in the rotor and stator grooves, but in opposite directions, the result being an opposed flow collision that imparts tremendous shear forces upon the product.

The MegaShear has been proven to produce sub-micron dispersions and emulsions, however, its most impressive characteristic is its ability to disintegrate solids, into extremely small particles, in a single pass.

The high-energy Ross MegaShear represents a quantum leap over existing rotor / stator mixer technologies and is available in flow rates from 1 to 500 gallons / minute.
Share