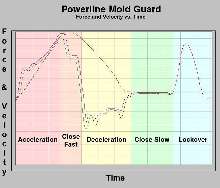 The software can be programmed to monitor the clamp's entire stroke or just a portion of the stroke. The ejector's entire stroke is always monitored. Both software programs are ON/OFF selectable, and automatically compensate for force increases due to changes over time from friction or temperature. Actual force and maximum force deviation are displayed on-screen to allow for troubleshooting of mold problems.

Mold Guard tracks the force required to close the clamp, using the previous cycle as the force reference curve. The clamp retracts if the force exceeds the alarm band limit. Though Mold Guard is not active when establishing the initial reference curve, tooling is still protected with the Powerline's standard Mold Protect feature, which monitors pressure and time. Standard Mold Protect also serves as a high limit when Mold Guard is active.

Ejector Guard operates in the same manner. When excessive force is detected, Ejector Guard immediately stops forward movement of the ejector bar. After any setpoint change (except alarm band), Ejector Guard is inactive for one cycle to determine a new reference curve.

For more information, phone Milacron, Inc. at 1-888-MILACRON (645-2276) or fax 1-800-282-8082. Visit Milacron's home page at www.milacron.com for a detailed look at solutions that build productivity through advanced technology.
Share