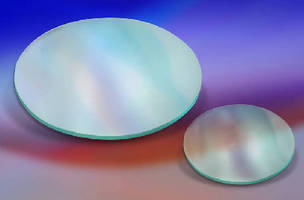 CMOS IR Filter is designed to block up to 99.5% of IR radiation while transmitting more than 85% of visible light. Optical thin film coating can be applied to glass as thin as 0.003 in., which can be used as encapsulating cover glass for devices being flooded with damaging environmental infrared. Filter is suitable for camera applications where IR radiation must be blocked to minimize effects of extraneous light and to optimize clarity.

The improvement in the new infrared filter is critical to CMOS imaging systems that require a highly effective, stable, and uniform IR reduction. The optical thin film coating can be applied to glass as thin as 0.003 inches, which can be used as an encapsulating cover glass for devices being flooded with damaging environmental infrared.

The advancement in DSI's new IR filter can significantly improve the signal- to-noise ratio in visible CMOS imaging systems that are subject to unwanted IR radiation. It is ideal for use in camera applications where it is critical that IR radiation is blocked to reduce the effects of extraneous light and to improve clarity and contrast in the imagery.

Deposition Sciences, Inc. (DSI) - Santa Rosa, CA - www.depsci.com - For over 20 years, Deposition Sciences has produced the most durable optical thin film filter coatings in the industry. DSI's coating capability ranges from the ultraviolet (UV), through the visible and includes near-infrared (NIR), midwave-infrared (MWIR) and out to the longwave-infrared (LWIR). At the heart of these capabilities is DSI's patented MicroDyn reactive sputtering technology enabling superior multilayer thin film coatings for optics, MEMS and other thin film technologies.
Share