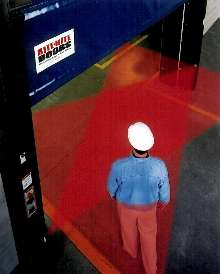 I-Zone(TM) Area Detection System for high-speed doors utilizes infrared (IR) technology to sense pedestrians before they are in door opening. Infrared beams cross to form seven-foot safety zone and keeps door open while pedestrian is moving through zone. Self-monitoring feature detects potential problems with operation and sounds alarm to indicate need for examination. System can be added to new and existing installations.

MILWAUKEE--Rite-Hite Doors, Inc. announces the introduction of the I-Zone(TM) Area Detection System -- the newest safety device available for high-speed doors. This revolutionary system utilizes infrared (IR) technology to sense pedestrians before they are in the door opening, and prevents a door from beginning to close when a person enters the seven foot safety zone. This helps reduce the risk of impact because the door stays open when people are moving towards the door -- not just when a person is standing in the door opening.

Conventional downward-acting doors use reversing photoeyes to detect traffic within the door opening. This means that a pedestrian may be under a closing door before being detected by the photoeyes. The I-Zone extends safety beyond the door opening, and detects people as they approach the door from either side of the opening. Each IR sensor looks out in front of both sides of the opening, and the infrared beams cross to form the safety zone. If a pedestrian enters this zone, the door remains open. In addition, the sensors reverse the door if the close cycle has already begun and a pedestrian enters the zone. The I-Zone system keeps the door open the entire time the pedestrian is moving through the zone.

The I-Zone system also includes an exclusive self-monitoring feature. If the system detects a potential problem with its proper operation, an alarm will sound to indicate that the sensors should be examined.

The new I-Zone system is available exclusively on Rite-Hite Doors' Protecdor® and TrakLine(TM) Series doors, and can be added to both new and existing installations.

Rite-Hite Doors, headquartered in Milwaukee, Wis., is a leading manufacturer of high performance doors designed for increased safety and productivity, and reduced operating costs. For more information on the new I-Zone System, call "The Leading Edge in Door Safety," Rite-Hite Doors at 1-800-456-0600, or visit our web site at www.ritehite.com.
Share