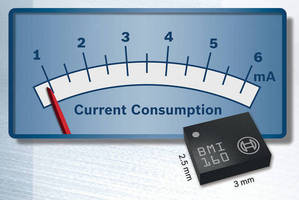 Bosch Sensortec‘s new BMI160 Inertial Measurement Unit (IMU) integrates a state-of-the-art 16 bit 3-axis, low-g accelerometer and an ultra-low power 3-axis gyroscope into a single package. It has been designed specifically for high precision, always-on 6-axis and 9-axis applications in smart phones, tablets, wearable devices, remote controls, game controllers, head-mounted devices and toys. The BMI160 is available in a 14-pin 2.5 × 3.0 × 0.8 mm3 LGA package. When the accelerometer and gyroscope are in full operation mode, the typical current consumption is 950 µA, best in class by a factor of two.

“Current battery limitations in devices such as smart watches, augmented reality glasses and wearable devices are restricting the adoption of more sophisticated applications which need to be continuously powered,” says Jeanne Forget, Marketing Director of Bosch Sensortec. “With its industry leading current consumption, the BMI160 makes a significant contribution to overcoming this hurdle, and will help usher in a new era of always-on applications.”

Additional sensors from the Bosch Sensortec family, such as geomagnetic (BMM series) or pressure sensors (BMP series), can be connected as slaves via a secondary I2C interface. In this configuration, the BMI160 controls data acquisition of the external sensor with all sensor data being stored in the built-in FIFO. With the secondary interface configured as high speed SPI interface and connected to camera module, BMI160 also supports optical image stabilization (OIS).

The built-in power management unit (PMU) can be configured to further lower power consumption by automatically sending the gyroscope temporarily into fast start-up mode, then wake-up using the any-motion interrupt of the accelerometer. When connected to a geomagnetic sensor, the BMI160 can trigger a read-out of the magnetometer sensor data without host processor intervention. Longer host controller sleep cycles reduce power consumption at the system level. The integrated FIFO supports low power applications and prevents data loss in non-real-time systems. The FIFO architecture allows dynamic reallocation of FIFO space for accelerometer, gyroscope and external sensors respectively.

The BMI160 fulfils the requirements of most standard operating systems and is fully Android 4.4 (KitKat) and Windows 8.1 compliant. Significant motion and step detector interrupts consume less than 200μA each.

The BMI160 is intended for high-volume consumer electronics manufacturers. Samples of the BMI160 are available now to key development customers.

Bosch Sensortec GmbH is a fully owned subsidiary of Robert Bosch GmbH. It develops and markets micro-mechanical sensors for consumer electronics, mobile phones, safety systems, industrial technology and logistics. The product portfolio includes triaxial geomagnetic and acceleration sensors, triaxial gyroscopes, barometric pressure sensors and a comprehensive software portfolio for various applications. Since its foundation in 2005 Bosch Sensortec emerged as the technology leader in the addressed markets. The Bosch Group has been the global market leader for MEMS sensors since 1998 and has to date sold more than 3 billion MEMS sensors.

For more information, go to www.bosch-sensortec.com

The Bosch Group is a leading global supplier of technology and services. In 2013, its roughly 281,000 associates generated sales of 46.1 billion euros. (NB: Due to a change in accounting policies, the 2013 figures can only be compared to a limited extent with the 2012 figures). Its operations are divided into four business sectors: Automotive Technology, Industrial Technology, Consumer Goods, and Energy and Building Technology. The Bosch Group comprises Robert Bosch GmbH and its roughly 360 subsidiaries and regional companies in some 50 countries. If its sales and service partners are included, then Bosch is represented in roughly 150 countries. This worldwide development, manufacturing, and sales network is the foundation for further growth. In 2013, the Bosch Group invested some 4.5 billion euros in research and development and applied for some 5,000 patents. This is an average of 20 patents per day. The Bosch Group’s products and services are designed to fascinate, and to improve the quality of life by providing solutions which are both innovative and beneficial. In this way, the company offers technology worldwide that is “Invented for life.”