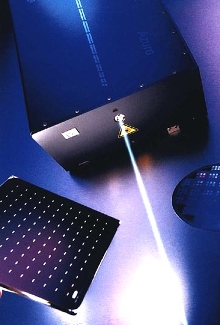 A unique "hands-free" 266-nm laser source, the Azure has been designed for industrial applications ranging from writing fiber Bragg gratings to semiconductor metrology. In the semiconductor market, for example, Azure's 266-nm wavelength allows the detection of small but critical defects that longer wavelengths miss. And for disc mastering, it enables CDs and DVDs higher information storage density than was available in the past from standard 351-nm and 413-nm devices.

"The Azure is rugged, easy to integrate, and although it's a frequency-doubled device, its near diffraction-limited beam has the ultra-low amplitude noise that is characteristic of a single-
frequency laser source," said Terry Hannon, senior marketing manager for Coherent Laser Division. "And since we've incorporated automatic control of all operating features, it is the first all-solid-state, deep-UV laser to operate fully hands-off and be independent from regular user or service intervention for many thousands of operating hours."