Based on the principle of laser triangulation, the Class II SLS5000 sensors have a totally integrated sensor within the head and a built-in processor for data averaging and filtering. A unique dynamic laser feedback loop allows accurate measurement without regard to speed, ambient light changes, color, temperature of material or general plant environmental conditions.

This characteristic allows the sensor to make virtually error-free measurement with total reliability and repeatability up to 16,000 times a second within a small, defined spot using very little power.

The sensors are easy to maintain, install or interface with most computer and PLC systems without time consuming and costly integration.

Designed for optimum flexibility, the SLS5000 sensors require a power source from 18 to 32 Volts DC and provide data in both standard 0-20A or 4-20mA analog and RS-232-C or RS-422 digital output. Each SLS5000 sensor is factory calibrated to provide a linear measurement output.

To avoid the possibility of engine failure either at hot test or soon after a new car is put into service, the SLS5000 sensor can measure the position of each follower as the head moves continuously down the conveyor. Data can be taken along the length of each passing follower and compared to pre-defined position data limits for each roller. Upon passing, an accept/reject signal is generated.

"Many engines use roller followers on the camshaft to reduce friction and wear," noted Mike Snow of LMI Selcom. "Typically, the cylinder head assembly is done automatically. When one of the roller followers is not seated properly in the assembly, for example, the roller axis is cocked at an angle. The sensor will catch this occasional defect allowing the automotive manufacturer to reset the follower before the vehicle is released to the dealer or the consumer."

Snow noted that since the follower location is deep within the head assembly, previous quality assurance measures such as visual inspection or mechanical probing have not proven to be 100% effective. With the SLS5000, 100 percent inspection is possible even at the high production line speeds with essentially no modifications to existing automation, he added.

If the keepers are defective or assembled incorrectly, the valve drops and hits the piston, causing major engine failure.

For optimum quality control, two SLS5000 sensors can be mounted on line over each row of valve stems. As the stems pass under the sensors, the height of each keeper can be measured. Measured data is compared to user-defined criteria and a good/bad signal is provided.

"These are just a few of the many applications where the SLS5000 sensor can be used in the automotive industry," Snow noted.

The SLS5000 sensors are built to NEMA-4 (IP-67) standards and are enclosed in aluminum housing for optimum airtight sealing and protection from moisture and dust. The sensor's flat front allows easy cleaning of the optics. 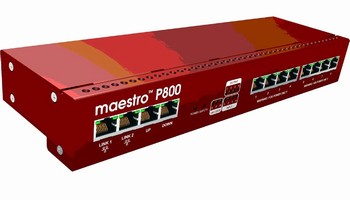 Orchestrate Your Machine Vision with Maestro(TM)