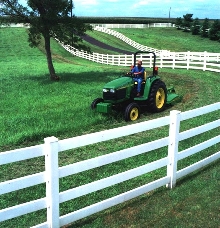 For years operators have been asking for it, and John Deere has delivered. With the introduction of the iMatch ASAE Cat. 1 Quick-Attach Hitch, operators can attach implements easier and quicker on all 4000 TEN Series tractors.

This system, exclusive to John Deere, converts the three points of a 3-point hitch to fixed hooks and attaching points. Operators can now simply back up the tractor and slide on the PTO shafts. The new system is ideal for commercial users who need to save time and homeowners who need an easier way to work with a variety of tools.

The iMatch Quick-Attach Hitch system meets all American Society of Agricultural Engineers (ASAE) standards and is an affordable, available option for all models of the 4000 TEN Series compact utility tractors.

Big Features with a Compact Price

Combining the latest technology with more than 165 years of experience, John Deere offers a variety of new features in the 4000 TEN Series. The eMatch Operating System, an enhanced electronic operating system, allows the operator to "customize" the tractor transmission responses to the job at hand. The features include: SpeedMatch that offers the ability to preset a maximum speed; MotionMatch that offers the ability to select the rate of deceleration; and LoadMatch that helps prevent engine stalls. Optional automotive-style cruise control features on-the-go acceleration, deceleration and resume functions.

With the 4000 TEN Series tractors come two industry firsts - the eHydro and the ePowrReverser electronically controlled transmissions. All eHydro models (4210, 4310, 4410, 4610 and 4710) feature eTouch controls that provide for easy electronic engagement of PTO, MWFD and hydrostatic drive pedal functions. This technology is similar to the "fly-by-wire" technology used in fighter planes.

Also available on every model of the 4000 TEN Series is the new John Deere iMatch quick coupler hitch system. This implement attachment system converts a typical 3-point hitch system to fixed hooks with attaching points allowing operators to simply back the tractor up, flip the lever and slide on the PTO shafts. iMatch is a direct response to customer feedback and will make implement attachment quicker and easier.

4010 CUT
The 4010 CUT comes with a 3-cylinder, 18.5-hp engine and a standard 2-range, hydro transmission. Four-wheel drive comes standard on this model.

4115 CUT
A 3-cylinder, 24-hp engine powers this model that also comes with the hydro transmission with two speed ranges. Four-wheel drive is standard on this model.

4210 CUT
The 4210 offers a choice of SyncShift or eHydro transmissions powered by a 3- cylinder engine. The SyncShift model boasts a 28-hp engine with nine forward and three reverse speeds, while the eHydro model comes with a three-speed range transaxle. Four- wheel drive is optional on this model.

4310 CUT
Consumers can choose from three different transmissions for the 4310, including SyncShift, ePowrReverser or eHydro. SyncShift comes with nine forward and three reverse speeds. The ePowrReverser has 12 forward and reverse speeds, and the eHydro transmission comes with three speed ranges. The 4310 is powered by a 3-cylinder, 32-hp engine and offers optional four-wheel drive.

4410 CUT
The 4410 model boasts a 3-cylinder, 35-hp engine with a standard ePowrReverser transmission. The ePowrReverser has 12 forward and 12 reverse speeds. Operators may also opt for the eHydro transmission with three speed ranges. Four-wheel drive is standard on the 4410.

With a choice of two transmissions: the PowrReverser (12 forward and 12 reverse speeds) and the eHydro (three speed ranges), the 4710 model is top of the line. This model is powered by a tough 48-hp, 4-cylinder engine and comes standard with four-wheel drive.
Share