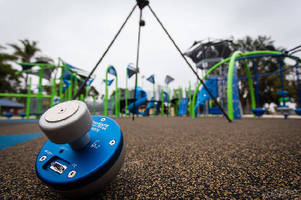 Designed for testing various recreational surfaces, HeadSAFE Impact Tester is dropped from designated heights and data is used to calculate potential for head injury. Portable ASTM-compliant unit features built-in data logger with internal accelerometers that are DC-response and ranged for surface testing. HeadSAFE records XYZ impact data with detailed date and time stamped history. Up to 2,000 events can be stored in 1 GB flash memory, which can be downloaded for analysis.


Seal Beach, CA – Growing concerns over traumatic brain injuries in children has spotlighted the need for safer recreational surfaces on playgrounds and sports fields. Despite improvements in design and safety features, the U.S. Consumer Product Safety Commission reported that an average of 219,000 playground-related injuries are treated in emergency rooms each year. Even more alarming is the fact that annually nearly 21,000 playground incidents result in traumatic brain injuries to children aged 14 and younger, according to the U.S. Centers for Disease Control and Prevention.

In an effort to help reduce playground head injuries, Diversified Technical Systems (DTS) introduces the HeadSAFE Impact Tester. Designed specifically for testing recreational surfaces, the portable headform (simulating a child's head) is dropped from designated heights and the data is used to calculate the potential for head injury from various surfaces. Engineered for field inspectors and surface manufacturers, HeadSAFE features a built-in data logger with internal accelerometers that are DC-response and ranged for surface testing.

HeadSAFE records XYZ impact data with a detailed date and time stamped history. Because there are no cables or wires, set up is quick and easy, plus it delivers true free-flight test dynamics for reliable and repeatable test data. The intuitive software makes it easy to set-up test parameters, adjust viewing options and calculate Head Injury Criterion (HIC). Up to 2000 events can be stored in the 1 GB flash memory, which can be downloaded at any time for analysis. HeadSAFE also generates custom lab or inspector surface field reports on the spot and is both US ASTM F1292-13 and European EN 1177 compliant.

“Knowing that DTS plays a role in making playgrounds and kids safer is important,” says Hans Hellsund, Director of Sales for DTS, a global manufacturer of miniature rugged data recorders and sensors. “For over 26 years all of our work has been focused on helping keep people safer, whether it’s with auto manufacturers, crash test dummies or soldier protection,” adds Hellsund.

For more information on the HeadSAFE Impact Tester visit www.dtsweb.com or to see the full line of DTS data acquisition systems, data loggers and sensors available. Visit DTS at the NRPA Show, Booth #1843.

About DTS: Since 1990, DTS data recorders and sensors have been used worldwide for automotive crash testing, military blast testing and in crash test dummies for occupant safety testing and research.  The U.S. Army named a DTS helmet sensor as one of “The Greatest Inventions.”  Inc. Magazine has named DTS three times as one of the fastest-growing private companies in the U.S.  Headquartered in Seal Beach, California, DTS also has technical centers in Michigan, United Kingdom, France, Japan and Asia-Pacific.  www.dtsweb.com
Share