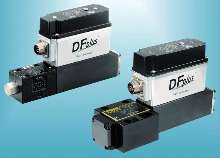 Series D1FP and D1FP*S direct operated control valves use valve-drive technology that actuates spool by using moveable coil over permanent magnetic cylinder to eliminate friction. Used for hydraulic axis positioning as well as controlling force and velocity, D1FP is driven by VCD actuator and can be used in applications with pressure drops up to 4,500 psi. Series D1FP*S provides users with nominal size 04 valve that uses VCD technology to maximize dynamics and flow.

The D1FP features extremely high dynamics combined with maximum flow. It is used for high accuracy positioning of a hydraulic axis, and for controlling force and velocity. Driven by the patented new VCD® actuator, the D1FP reaches the frequency response of servovalves. Unlike solenoid driven valves, the D1FP can also be used in applications with pressure drops up to 315 Bar (4500 PSI) across the valve. The D1FP*S is a nominal size 04 (ISO 10372) valve that also uses the new VCD® technology to provide extremely high dynamics combined with maximum flow. Parker VCD® valve-drive technology has revolutionized the operation of high response control valves. In contrast to standard proportional solenoid drives, this technology actuates the spool by using a moveable coil over a permanent magnetic cylinder to eliminate friction.

With annual sales exceeding $7 billion, Parker Hannifin is the world's leading diversified manufacturer of motion and control technologies and systems, providing precision-engineered solutions for a wide variety of commercial, mobile, industrial and aerospace markets. The company employs more than 48,000 people in 46 countries around the world. Parker has increased its annual dividends paid to shareholders for 48 consecutive years, among the top five longest-running dividend-increase records in the S&P 500 index. For more information, visit the company's web site at www.parker.com, or its investor information site at www.phstock.com.
Share