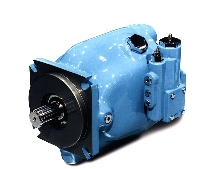 Launch time. The XL Series' first exposure to the market takes place at the joint International Fluid Power Exposition and Conexpo exhibition in Las Vegas starting on March 1 9, 2002. Denison is displaying XL and other products, including a new digital fan drive, in Booth S-1 3251.

The first available model - from an eventual range of 10 units - is the XL75, a 75 cc/rev displacement pump with standard hydro-mechanical controls. It will be available in an electronic controlled version later in 2002.

A total of 10 models, ranging from 10 cc/rev all the way to 260 cc/rev, will be made available over the next couple of years.

If you're not the first, be the best. The XL Series has been developed to go head-to-head with several existing brands of pumps. Because it isn't first in the market, the company's strategy has been to ensure it's the most advanced, Klimaszewski says. "It's more compact, quieter - even more streamlined - than competitive units."

Since when does a hydraulic pump need to be streamlined? "What we've done," Reilly laughs, "is design a product that doesn't have controls and wires hanging all over it. Everything is integral with the pump. Compact. Competitive pumps look like they're loaded with afterthoughts."

Who's the competition? "No sense naming names," Hodges says. "Suffice it to say that we've identified and studied them."

Studied them? "We bought 18 competitive pumps for analysis and benchmarking," Hodges says. "We were very thorough. We know their weaknesses and have built on that knowledge with our pump."

For example? "It begins with something as basic as the housing of the XL Series," Stakely says. "Our pump has a smooth, rounded construction; it's quieter as a result. There are no drum-type surfaces to amplify noise. Our pump has hydrostatic bearings for faster response and longer life. And our pump uses static 0-ring seals rather than gaskets."

Design for manufacturing. Denison design and manufacturing engineers worked together to ensure that the XL Series is not overly complex to manufacture. "And we invested heavily in new manufacturing equipment," Hayes says. "We have flexible, two-story machining centers that hold 330 tools. And a manufacturing flow system that moves parts from machining cells to the assembly area quickly and efficiently."

Design tools. Prototype plastic parts and failure modes and effects analysis (FMEA) were also vital to the design-development activity, Stakely says. A 3D Systems printer was used to make prototype plastic solid parts. The plastic parts were particularly useful when team members communicated with vendors. "The 3D printer helped us avoid a lot of casting problems," he says. "And FMEA - a design tool that was first used in the aerospace industry - gave us a systemized way of looking at how a product might fail. We used FMEA throughout the process."

Long term commitment. With the introduction of a total of 10 pumps in the XL family and with the potential for higher pressure units and even over-center transmission versions, the team expects to be busy with new product launches for several years. "This is a major commitment for Denison," Klimaszewski says. "We're in it for the long haul."

The name. What were the factors that caused Denison to name the new family the XL Series? The group's consensus: as a Denison brand, it stands for excellence. Reilly offers an alternative suggestion: "It's easy to spell," he jokes.

Teamwork for a truly global product. Although it's a product designed and manufactured at the company's headquarters in Marysville, Ohio, the development of the XL Series is the result of a total-company effort - from market research all the way through to manufacture. Early in the program, meetings were held in Europe to brainstorm the product. Global customers were contacted and consulted.

Engineers at Denison's Hilden, Germany, valve plant have played a continuing role in integrating their valve products into and onto the XL Series. "They've offered great advice," Dr. Gunda says, "and we've listened."