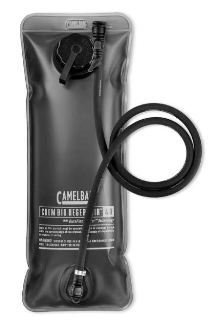 The CBR 4.0, already operational in combat situations with U.S. Special Forces, will be used by elite elements of the New York Police Department as well as U.S. Secret Service and the Department of Health and Human Services during the upcoming GOP convention.

CamelBak's CBR 4.0 represents more than five years of research and development that anticipated an increasing demand for hydration systems strong enough to survive the rigorous demands of combat use in chem-bio environments. It was thoroughly field-tested at Fort Polk's Joint Readiness Training Center. The CBR 4.0 system delivers immediate access to a safe water source during operations in the most hazardous environments.

"CamelBak's CBR 4.0 was created to meet the U.S. military's demand for hydration systems that could instantly adapt to new threats as situations suddenly change," said Chuck Hunter, senior vice president and general manager of CamelBak Product's military government and industrial units. "The threat of biological or chemical terrorism is increasingly possible given the fanaticism and unpredictability of global terrorist networks. In chem-bio environments, quick access to clean, safe drinking water is critical for clear thinking, peak performance and survival."

Dehydration is a significant concern for personnel operating in hazardous environments. Heat stress can develop more rapidly among personnel wearing airtight Mission Oriented Protective Posture Four (MOPP 4) gear, which can add an additional 20 degrees to the perceived outside temperature. Personnel operating with the CBR 4.0 in hazardous environments gain a major advantage through the ability to stay hydrated and work for longer periods of time, during both the initial incident and clean-up stages. Using the CBR 4.0 results in greater mission flexibility and reduced risk of dehydration casualties.

Although the CBR 4.0 only recently became available, a number of U.S. and foreign governments already have expressed interest. Three foreign countries now are considering the new reservoir for standard issue with their land forces. In the United States, the Marine Corps and major domestic law enforcement agencies from New York City to Honolulu are preparing to deploy the new chem-bio resistant systems with their elite first responders.

The worldwide demand for this added level of capability is significant, not only from military, but also from security personnel and HAZMAT teams trained to handle situations that change in the blink of an eye. The CBR 4.0 fits into most CamelBak Maximum Gear hydration system and is compatible with standard Protective Mask fittings used by military, first responders and security personnel. The CBR 4.0 is proven to withstand exposure to hazardous toxins including Sarin nerve and Mustard blister agents and protects from deadly biological microbes such as Anthrax.

CamelBak Products, LLC., is the originator and world leader in hands-free systems for hydration on the move. Since 1991, CamelBak has built a reputation with first responders, law enforcement officials and military personnel as the product of choice when seeking state-of-the-art hydration.

CamelBak continues to refine and evolve its products for situations that demand peak hydration to support peak performance, whether dealing with natural disasters at home or potential biological and chemical threats abroad. The privately-held company is headquartered in Petaluma, California.
Share