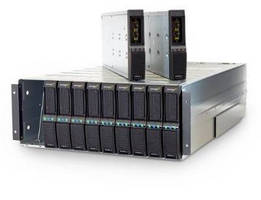 Incorporating 6 TB HGST UltraStarÂ® He(6) helium-filled drives andÂ PanFS 6.0 storage operating system, Panasas ActiveStor 16 delivers up to 122.4 TB of capacity per 4U enclosure, providing more than 1.2 PB per rack. RAID 6+ with triple parity protectionÂ minimizes odds of data loss by 150x when compared to dual parity protection schemes. Per-file distributed RAID, based on erasure codes, allows reliability and availability to increase as capacity grows, rather than decreasing at scale.

SUNNYVALE, Calif.,  -- Panasas, the leader in hybrid scale-out NAS for technical research and enterprise customers, has unveiled the Panasas ActiveStor 16 hybrid storage appliance with the PanFS 6.0 storage operating system, setting the bar for reliability and availability for high-performance storage and big data workloads.

As adoption of high-performance computing increases in the enterprise and big data deployments continue to grow in scale, traditional RAID approaches no longer deliver an adequate level of storage reliability. With ActiveStor 16 and PanFS 6.0, Panasas answers the challenges of reliability and availability at scale along with high performance, ease of management and virtually limitless capacity, without compromise.

ActiveStor 16 marks the debut of the PanFS 6.0 file system, with RAID 6+ triple parity protection that achieves a 150x increase in reliability over dual parity approaches while minimizing drive rebuild times. Other Panasas firsts for ActiveStor 16 include 6TB HGST UltraStar(® )He(6) helium-filled drives and a doubling of the capacity of on-system solid state drive (SSD) resources for increased metadata and small file performance. The new platform nets a 50 percent gain in system density while optimizing on-system flash for the new RAID 6+ implementation.

"With big data workloads pulling high performance computing into the mainstream of the enterprise, customers' expectations for reliability and availability have increased at a time when traditional data protection has reached its limits," said Steve Conway, research vice president, IDC. "The developments in Panasas ActiveStor 16 and PanFS 6.0 show timely industry leadership in addressing this growing concern and tackling the challenges of reliability and availability at scale."

--  RAID 6+ with triple parity protection, which decreases the odds of data loss by 150x when compared to dual parity protection schemes. Capacity and performance overhead are minimized, offering the efficiencies of less protective approaches.

--  Per-file distributed RAID, based on erasure codes, allowing reliability and availability to increase as capacity grows, rather than decreasing at scale as traditional RAID approaches do.

--  Extended File System Availability, which helps ensure business continuity by keeping the file system online even in the event of "one too many" drive failures - events that normally take other storage products completely offline.

--  Improved disaster recovery, allowing administrators to quickly restore a small, specific list of files rather than having to restore the entire file system in the event of catastrophic failure.

"With the introduction of ActiveStor 16 and PanFS 6.0, Panasas is strongly positioned to serve the rapidly growing market driven by technical workflows in enterprise computing," said Faye Pairman, CEO of Panasas. "Combining recent advances such as commercial-grade Windows support with our new RAID 6+ support in PanFS 6.0, it's clear that Panasas is ahead of the curve in assuring the feature functionality, reliability and availability, and performance required to drive big data's biggest discoveries."

"As an inventor of RAID taxonomy more than 25 years ago, I couldn't be more pleased with our engineering organization for the leap forward in data protection at scale that RAID 6+ represents," noted Garth Gibson, co-founder and chief scientist of Panasas and co-author of "A Case for Redundant Arrays of Inexpensive Disks (RAID)," also known as the Berkeley RAID paper. "As storage performance and capacity continually escalate with the demands of technical computing and big data workloads, it is absolutely essential that the tools for protecting that data keep pace with the rate of change."

The hybrid ActiveStor 16 system blends cost efficient disk-based storage with additional flash capacity and metadata performance, making the platform an optimal choice for PanFS 6.0 with RAID 6+ data protection. Depending on configuration, ActiveStor 16 ships with up to 122.4 TB of capacity per 4U enclosure, providing more than 1.2 PB per rack. In production, ActiveStor 16 will achieve up to 150 GB per second data throughput with capacity that scales beyond 12 PB in a single file system. Manageability is simple and initial systems can be deployed in less than 10 minutes. Capacity and performance scaling is seamless, without requiring downtime.

Panasas ActiveStor 16 and PanFS 6.0 are available for order today and expected to ship in September. For additional information, visit panasas.com/products or meet us in Europe in June at EAGE Booth# 3234 (Amsterdam) or ISC'14 Booth# 742 (Leipzig).

Panasas ActiveStor® hybrid scale-out NAS appliances drive enterprise and research innovation by accelerating workflows and simplifying data management. ActiveStor solutions leverage the patented PanFS® storage operating system, delivering high performance and reliability at scale from an appliance that is as easy to manage as it is fast to deploy. Now in its fifth generation, ActiveStor is optimized for the most demanding big data workloads in energy, government, life sciences, manufacturing, media, and university environments and has been deployed in more than fifty countries worldwide. For more information, visit www.panasas.com.