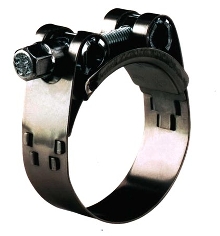 Mechanically interlocked NORMACLAMPÂ® GBS M, made of lightweight aluminum-zinc, has rounded edges to minimize hose abrasion. It is offered in 4 bandwidths, with diameters ranging from 1 to 6 in. in increments of 1/4 in. Diameters up to 10 in. are also available. No Chromium VI is used in manufacturing of clamp or hex bolt. Clamp is used to contain high pressure or suction in municipal applications and in heavy construction, agricultural, and irrigation equipment.

The NORMACLAMP® GBS M is a new generation of NORMA's GBS series, which is widely used to contain high pressure or suction in municipal applications and in heavy construction, agricultural and irrigation equipment. The GBS M is designed to be installed with twice the tightening torque of the previous design, and also offers twice the failure torque.

The new clamps are made of rugged, lightweight aluminum-zinc, with rounded edges to minimize hose abrasion. Stainless steel versions, in AISI 304, will soon be available. No Chromium VI is used in the manufacturing of the clamp or the hex bolt, which can be tightened or removed with a standard tool.

The GBS M is available in four band widths, depending on diameter. In-stock diameters range from one to six inches, in increments of 1/4-inch. Diameters of up to 10 inches are also available. All can be ordered with NORMA's standard Quick-Release Closure, or QRC, which further reduces assembly time.

Norma Products (U.S.), Inc. is a leading manufacturer of clamps and connecting systems for automotive, heavy truck and industrial applications. The company, supported by a growing network of stocking distributors, is the North American subsidiary of Rasmussen GmbH of Germany.
Share