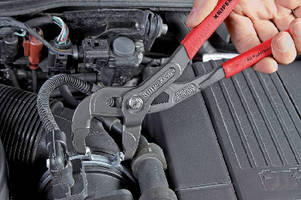 Made specifically for opening hose clampsÂ up to 3 in. in diameter, CobraÂ® Hose Clamp Pliers are maneuverable for all different angles enabling use inÂ confined areas. Unique design of tips minimizes slipping off workpiece, while pushbutton allows for fine adjustment. Made from German chrome vanadium electric steel, forged and oil hardened, pliers have box-joint design for stability and slim head for reaching into tight places.

ARLINGTON HEIGHTS, Ill. – KNIPEX Tools LP adds new hose clamp pliers (85 51 250 A SBA) to its Cobra® line of pliers. The new pliers offering is made specifically for opening hose clamps quickly and efficiently. The hose clamp pliers have the same features as Cobra pliers, with the added benefit of universal, rotatable tips for tight grabbing.

“The new hose clamp pliers are made to open multiple types of hose clamps, up to 3 inches in diameter,” said Alan Sipe, president and general manager, KNIPEX Tools. “They are perfect for confined areas and provide the ability to reach all angles with its rotatable, universal grip inserts. It’s truly one of a kind.”

The tips of the hose clamp pliers feature a unique design to reduce slipping off the workpiece when opening hose clamps. The pliers are maneuverable for all different angles and can open clamps without great effort due to the high-leverage design.

Distinguished by a push button for fine adjustment, these pliers are quick and comfortable to use. Fast adjustment on the workpiece can be made with the push of a button. With pliers in hand, the user presses down the push-button adjustment and fully opens the jaw on the workpiece. The user slides the lower jaw up until it is positioned on the workpiece, squeezes the handles together and the jaws are now locked in place and ready to use.

The slim head design is ideal for reaching into tight places and the forged, box-joint design provides high stability. The pliers are made from German chrome vanadium electric steel, forged and oil hardened. The new hose clamp pliers are more robust and easier to use on hose clamps.

About KNIPEX Tools
KNIPEX Tools LP is the North American sales and marketing organization of KNIPEX-Werk and is located in Arlington Heights, Ill. KNIPEX-Werk, Wuppertal, Germany, is the largest manufacturer of professional quality pliers in the world, producing up to 65,000 pliers per day, or up to 325,000 pliers each week. The company concentrates its efforts on being the best pliers manufacturer in terms of quality, innovation and efficiency and its pliers satisfy the highest expectations in terms of performance, ergonomics and service life. www.knipex-tools.com