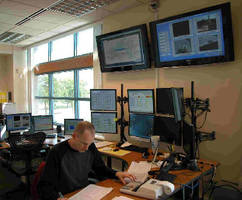 Console Recorder automatically records images being shown on any number of HMI or SCADA displays to show what operators were watching at time of event, alarm, or process upset. Video images can be combined with automatic data mapping capability of Video Historian, enabling Console Recorder to retrieve and replay operator displays when user clicks on time-based alarm or system message. Solution also supports integration of videos used for monitoring plant activities.


Video software records exactly what was on HMI screens when an event occurred, archives it, and plays the video back for training or analysis purposes.

Norwood, MA-September 11, 2009-Longwatch announces the Operator's Console Recorder, a software module that automatically records images being shown on multiple HMI or SCADA operator's displays. The module takes its signals directly from each HMI screen's video software driver, so it records the actual video being sent to the HMI. The software can accommodate video signals from an unlimited number of HMIs to show what operators were watching at the time of an event, alarm or process upset.

Video images can be combined with the automatic data mapping capability of Longwatch's Video Historian, so the Console Recorder can automatically retrieve and replay operator displays simply by clicking on a time-based alarm or system message. Playing back what the operator was seeing at the time of an event can be a valuable tool for training and analysis purposes, and can help mitigate insurance and regulatory issues by eliminating guesswork and conjecture.

Videos used for monitoring plant activities can also be combined with the operator console videos and data from a process historian. This enables engineers, analysts or investigators to see what was happening in the plant, what the operator was seeing on the HMI screen at the time, and all relevant real-time data that occurred at the time of an event.

For example, in the case of a leak at a pumping station, investigators could watch plant video taken at a remote site showing fuel oil creeping across the floor of a pumping station, real-time data being acquired from pumps, valves and the receiving tank while the leak is occurring, what appeared on the operator's HMI screen, and the alarm screen that came up when the leak detector went off. Investigators can then watch the operator switch the HMI screen to live video feed from the pumping station, observe the leak, and take action from the HMI to shut off the pump. Plant video would show the arrival of a maintenance crew to repair the leak. Analysis of all data and videos might show that the leak detector was poorly positioned and an alarm condition is needed for when fuel oil is being pumped but is not being received at the storage tank.

With a typical three-display system, as found in many process control applications, it would be possible to display remote pump video on one screen, video from the operator's display at the time of the event on a second screen, and process historian data on a third screen, thus getting a simultaneous view of what happened and what the operator saw.

To help mitigate insurance and regulatory issues, the combined video and historian information could help determine that the operator acted correctly and the spill was cleaned up with no damage to the environment. The Longwatch Operator's Console Recorder and Video Historian fills the gap between normal plant data acquisition and actual plant management, because it shows everything that happened during an event; i.e., what actually happened, what the data acquisition equipment monitored and recorded, and what was reported to the operator on the HMI screen.

Capturing the actual video feed to the operator HMI is a much better solution than traditional methods, says Steve Rubin, president of Longwatch. "Before Longwatch, recording and playback of an operator's HMI was clumsy and limited. One method was to put a camera over the operator's shoulder. This is intrusive and intimidating, and the camera has a limited ability to read what's on the screen," he explains. "In an installation with multiple HMIs, this solution would require a camera on each screen."

Another method is to use process historian data. "It's possible to recreate the console display the operator should have been watching by driving it with data from the process historian," says Rubin. "This requires the historian to record all the data values present on every display. However, no one knows which screen an operator was actually watching at the time of the event. An operator could have been looking at a trend display, not the alarm summary screen."

With the Longwatch system, there is no problem reading the screens, and no doubt which screens operators were watching. By combining video data from plant locations, video from HMI screens, and data from the historian, investigators can go back in time to see exactly what happened and make a better analysis of what to do about a similar situation in the future.

About Longwatch
Longwatch was founded by a team of industry veterans with the goal of providing video over a variety of industrial communications networks. Advanced technology incorporated in the system enables automation system operators to utilize video to monitor and verify activities within the plant as well as at remote sites using the existing communications infrastructure. The system integrates video and system alarms on the same display for fast, reliable operation and decision-making in regulatory compliance, operating efficiency and security applications.