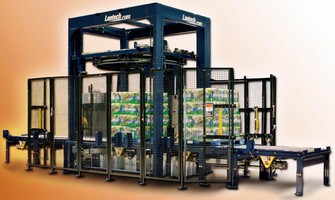 December 2006 - Lantech's revolutionary RS-6000 20-second stretch wrapping system meets the needs of consumer product companies shipping high volumes of pallet loads, providing the highest capacity in the industry at 180-200 loads per hour. A "first" in the packaging industry, the new RS-6000 Ring-Straddle(TM) design introduces a unique and patent-pending film delivery system capable of wrapping loads with 50-ga. film, pre-stretched 250% or more - without film breaks. According to Lantech, the new pre-stretch head and speed wrap get film onto the load so quickly that almost all film recovery (the film trying to "un-stretch" itself) occurs on the load, resulting in high containment force and reduced film use.

Developed to the specifications of a leading consumer goods manufacturer, the RS-6000 automatic conveyorized stretch wrapping system enables OEM's to satisfy mass merchandisers who want more SKU's in their warehouses, wider brand selection on their shelves and faster turnover of smaller inventories. "The new requirement from big retailers is 40-inch load height, not 70-inch, so the same volume of product has to ship on twice as many pallets," explains William Caudill, Lantech's marketing manager for automatic stretch wrapping products. "Suppliers want to minimize floor space and capital equipment with a single high-speed stretch wrapper that can match the 20-second cycle time of today's fastest palletizers, and the RS-6000 has been developed for this specific requirement." He adds that all suppliers to the large retailers are being affected, including household chemicals, food, drugs, cosmetics and beverages.

The RS-6000 Ring-Straddle stretch wrapper can wrap loads up to 50" x 50" x 80" (LWH). Starting and ending the wrap cycle is a new cut-and-clamp system that combines a new heat-free Press 'n Seal film sealing system. "A cut/clamp/seal cycle takes 4-5 seconds with a typical system, but this new patent-pending system gets it down to about 1.5 seconds to reduce our total cycle time," Caudill says.

Standard on the RS-6000 is Lantech's patented Pallet-Grip® system for locking a load to a pallet. Pallet-Grip effectively attaches a load to the pallet with bottom wraps of film that have been twisted into a cable along the lower 4-6 inches of the web. This tightly wound film cable is wrapped with 50% higher wrap force as it is secured an inch or two below the deck of the pallet, while the remaining film web stays above the deck and secures the load. Pallet-Grip wrapping leaves the fork-truck through holes open, ensuring that wrap force is never weakened.

The new film delivery system can wrap the complete pallet all the way to floor level without a load lift, saving $10-15,000 per machine. The new system also allows loads to be wrapped with as little as two pounds force. "Light loads are a problem for an electrically powered pre-stretch system, because the load always has to pull on the film to keep the system in dispensing mode. This machine can put a dust cover on a pallet of uncased paper towels, without deforming the load, twisting it, or crushing product on the corners," he says.

Clever design eliminates all overhead maintenance items that might require a ladder or man-lift. Pre-wired at the factory, the new design also allows the machine to ship in a single closed truck with its standard three sections of conveyor. It can be set up in one day, compared to three days normally needed for a typical overhead stretch-wrapping machine. The control system for the machine is based on an Allen Bradley CompactLogix PLC and PanelView Plus color touch screen.

According to Caudill, the RS-6000 breaks through a sound barrier of sorts that has limited stretch wrappers to a maximum speed of 50 rpm. "Above 50 rpm, the forces on the machine structure spike off the chart, but more importantly the response time of an electrically powered pre-stretch system cannot match the acceleration and deceleration needed to go faster," he explains. "The structural issues were overcome with good mechanical engineering and finite element analysis. However, the film delivery system required a new approach that mechanically links film payout to the movement of the head on the support ring."

A standard electrically powered film pre-stretch system has to first sense a "demand" for film, then it gradually ramps up output as it continues to sense "pull" on the film, he explains. It also has to decelerate in a gradual way at the end of the wrap cycle. "This lag in response time adds to the overall cycle because the film delivery system needs one revolution to reach peak output, and one revolution to decelerate," says Caudill. "Our new film delivery system has no ramp-up delay. It instantly pays out film in direct proportion to its speed of movement on the ring. This allows it to accelerate to 60 rpm from a dead stop without breaking the film. An electronic system cannot do this."

Because the film is paid out in direct proportion to the speed of the ring, there is minimal neck-down before film reaches the load, so wrapping can start with a greater width of film. The RS-6000 takes full advantage of this with a new cut/clamp/seal system that captures the full film width, enabling the machine to start and end a wrap cycle with a full width of film. "An electrically powered pre-stretch system has to sense 3-5 pounds of pull before it starts delivering film, so the film necks down while it's stretched between the pallet and the film head," Caudill adds. "A standard cut-and-clamp system compounds this problem by folding the width of the film down to just a few inches in the clamp. On the next load, wrapping starts with less than a full width of film, so it takes an extra revolution to get full containment, wasting film and time."

Rotating at 60 rpm, the new film delivery system is all-mechanical, eliminating the most significant shortcoming of a ring-mounted film delivery system - the slip ring used to transmit power and signals to the head. "The slip ring is a sliding electrical contact, so it's a weak link that affects machine performance and requires maintenance," Caudill explains. "It's the leading cause of film breaks in a ring type machine, because any interruption in the connection cuts power to the pre-stretch system for an instant. And customers don't want the maintenance headache.

"Our original goal for this machine was pure speed, but the overall system delivers amazing performance with 50-gauge film," Caudill adds. "We have a number of alpha systems in the field right now, and the film companies are clamoring to see them in action. The machine at Pack Expo is pre-sold, but we plan to be delivering production machines in January."

Lantech's packaging and productivity solutions include semiautomatic and automatic stretch wrapping; automatic case handling; automatic palletizing; shrink packaging and pallet-load conveying systems. Lantech is the originator of stretch wrapping technology and world's largest manufacturer, with 55,000 systems placed around the world and 175 patents. Headquartered in Louisville, Kentucky, with manufacturing operations in the U.S. and the Netherlands, Lantech products are sold and serviced by a network of 175 distributor locations. Visit www.lantech.com for more.
Share