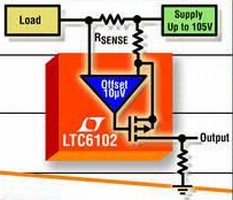 
MILPITAS, CA - July 18, 2007 - Linear Technology announces the LTC6102, the most precise high side current sense amplifier available. Maximum input offset voltage of the LTC6102 is only 10uV and it can accept differential sense voltages up to 2V. The resulting 106dB of dynamic range allows the LTC6102 to resolve micro-amps from amps of current. Compared to other current sense amplifiers, the dramatically lower offset of the LTC6102 allows for proportionately lower sense resistance without sacrificing resolution. Lower sense resistance means less wasted power and heat. The precision of the LTC6102 is bolstered by a near zero guaranteed input offset drift of less than 50nV/°C and a guaranteed input bias current of less than 3nA.

External resistors, selected by the designer, determine gain, gain accuracy and gain drift, and using precision resistors enables gain accuracy better than 99%. The topology of the LTC6102 allows the designer to customize power consumption, response time and the input/output impedance characteristics for the application. Furthermore, the LTC6102 has a 1us response time, allowing it to initiate fault protection or power shutdown in the event of unexpected load or supply current surges.