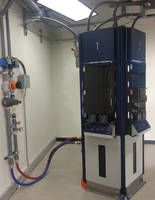 Self-contained HyrdoTower has up to 4 independently controlled thermal platforms for elevating and controlling temperatures of LEDs from 55 to 105Â°C for reliability testing. Modular design allows independent, concurrent temperature control for 4 separate purposes. HydroPac II offers 2 test positions and accommodates power loads up to 3,000 W, and HydroPac IV offers 2 independently controlled zones and up to 4 test positions and handles up to 6,000 W. Both have 35 to 85Â°C (105Â°C optional) range.

Fort Lauderdale, Fla. — EJ Thermal Technologies Inc., a company following in the footsteps of the former EJ Systems Inc., a major supplier of high performance reliability test systems, has introduced a line of three new LM-80 qualified LED reliability test systems. The HyrdoTower, the Hydropac II and Hydropac IV systems are designed for use by LED manufacturing and packaging companies and are geared to improve testing performance, flexibility, and temperature accuracy.

The HyrdoTower Tower is a self-contained pentagon shaped system which has of up to four independent precision controlled thermal platforms designed to elevate and control the temperatures of LEDs for reliability testing. The tower contains proprietary HydroFlo Amplifier technology that optimizes water flow to the system’s four thermal platforms. The HydroTower utilizes a liquid-to-liquid heat exchanger that allows the user to connect to a facility closed loop water system, or a chiller or a liquid to air heat exchanger (Radiator-style).

The system allows LED manufactures to increase the efficiency in testing High power/High brightness LED’s and offers a high degree of flexibility. The systems’ modular design allows very precise temperature accuracy of  +/- 2 C, at a temperature range of 55-105°C. The independent temperature control of each thermal platform allows the system to be used for 4 separate purposes at the same time, such as burn-in, reliability testing, and engineering product development.