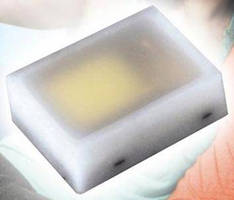 
The new generation of CERAMOS and OSLUX LED flash products from OSRAM Opto Semiconductors are twice as bright as their predecessors. They now meet even the high brightness requirements demanded by modern digital cameras with higher pixel resolutions. The brightest LED (without a lens) for flash photography is the CERAMOS, producing very bright light with its clear encapsulation. The CERAMOS is also available with a diffused encapsulation for a neutral white appearance. OSLUX, with its built-in special lens, is ideal for use without external optics in cell phones or digital cameras, and optimizes illumination over the target area.

CERAMOS produces an impressive 90 lumens from an operating current of 500 mA and is, therefore, one of the brightest LEDs without a lens for flash photography currently available on the market. Both CERAMOS versions are fully encapsulated. The version with the diffused encapsulation appears radiant white even when not in use, and can also be used as a signature design element. The CERAMOS LED with the transparent encapsulation appears slightly yellow. When used in cell phones, both versions help create excellent photos, even in darkness or difficult lighting conditions. The white light is produced by blue ThinGaN chips measuring just 1 mm² and a yellow converter by means of chip-level conversion.

The new OSLUX LED benefits from an optimized chip and lens design that results in increased brightness. It produces a remarkable 100 lux from an operating current of 500 mA; higher brightness values can be achieved with higher operating currents. OSLUX is, therefore, ideal for cell phones and high-quality digital cameras.

"A sizeable proportion of modern cell phones equipped with LED flash units use our high-flux LEDs," said Dr. Volker Harsle, Senior Director LED Marketing at OSRAM Opto Semiconductors. "This proportion will increase still further with the new LED flash products," he noted, since the new, brighter CERAMOS and OSLUX products can be easily used as drop-in replacements for the previous generation of LED flash units.