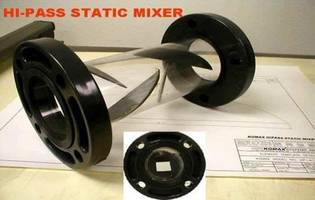 The Next Generation of Water Industry Mixers

The need for quality mixing equipment isn't going to disappear any time soon, and Komax Systems has developed a Hi-Pass Static Mixer that addresses that need in a surprisingly efficient manner.

Fouling and plugging plague many industries but none more so than the water industry, and for companies and municipalities, that creates loss production and downtime due to cleaning and maintenance. The Komax Hi-Pass mixer is specifically designed to be extremely resistant to fouling or clogging, as the elements are smoothly contoured with a large radius. Corners have been eliminated, meaning solid or fibrous materials are not trapped. In fact, the Hi-Pass design will readily pass individual solid items with a nominal diameter up to ½ that of the sludge mixer itself.

The dewatering process in polymer solutions is not only a key mixing process for many companies, but one where many problems occur too. It's here that the Hi-Pass truly shines. Many companies have found that using a Komax Hi-Pass Static Mixer results in polymer savings in excess of 25%.

A Pivotal Part of the Industrial Process

Perhaps the reason for the success of this mixer lies in the technology that stands behind it. The mixing action provided by a Komax Hi-Pass Static Mixer involves a four-element set that includes three inter-set cavities. Mixing performance isn't dependent on any standing or trailing vortex flow, so variations in the incoming flow do not affect the mixing process. Each mixing element in combination sweeps approximately two thirds of the circumference of the pipe and directs flow to the opposite side, providing very high wall-to-wall radial transfer.

"Our 'made-by-design' approach enables virtually any industry with a need to solve clogging and fouling in the mixing process to take advantage of a top quality, innovative mixing process that saves on energy and polymer use," said Sameer Kshirsagar/Senior Application Specialist.

The Komax Patented Triple Action mixing elements is superior to any other static mixer on the market! With three mixing technologies; two-by-two, cross current and counter-rotating vortices creating back mixing! This eliminates streaming or tunneling effects of the early static mixing design.

Proprietary solutions to your individual applications! Confidentiality is important to Komax Systems, Inc. and we understand when your clients expect the same!