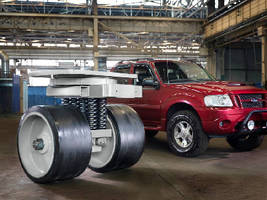 Towering 52 in. above factory floor and weighing more than 8,000 lb, Colossus Casters are designed with spring-loaded suspension system to absorb shock. Swivel construction consists of 32 and 18 in. diameter raceways flame hardened to 55-60 HRC with total of (96) 1Â½ in. diameter bearing balls. In addition, each caster features 8-position swivel lock for directional control, 7 in. diameter oscillating axle to accommodate uneven surfaces, and foot-operated braking system.

Hamilton Caster is well known for making heavy duty industrial casters  – and now, one of the biggest.  Hamilton recently designed and built four 100,000-pound capacity casters for a federal contractor.  Fully assembled, each caster towers 52 inches above the factory floor and weighs more than 8,000 pounds. Together, they represent Hamilton’s highest payload capacity ever: 200 tons.

“Everything about this job was colossal,” said Ralph Stampfli, Hamilton Caster’s truck team leader. “From the springs to the ball bearings. We even had to use a 30-ton crane, 6,000-pound forklift and 3/8th-inch chain just to move it out of our factory.”

“This is what Hamilton Caster does,” said Dustin Manz of Service Caster Corporation, the distributor that sold the casters. “They are the best out there as far as custom products go, and we needed that on this project. They really came through in a big way.”

“We’re very proud of Colossus,” said Mark Lippert, vice president of marketing. “It embodies everything Hamilton stands for: innovation, durability, precise engineering, and, of course, Made in America.”

About Hamilton Caster & Mfg. Co
Founded in 1907, Hamilton Caster is an industry leader in designing and manufacturing  stock and custom-engineered heavy duty casters, wheels, carts, and trailers.  Family owned since its inception, the fourth generation remains as committed to quality as the company’s founder, John Weigel.