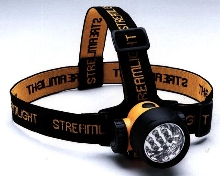 Septor(TM) is designed to be worn around the head and utilizes 7 LEDs for variable distance lighting. Its 90 deg tilting head enables user to zero in on target and can be adjusted at several angles. Water-resistant thermoplastic construction, rubber-shielded bezel, and unbreakable polycarbonate lens allow use in all elements. Septor operates on three AAA alkaline batteries and can run for up to 120 hrs in single LED mode. LEDs last up to 100,000 hours.

According to Streamlight President Brad Penney, the Septor was modeled after the company's Trident(TM) headlamp, which was introduced February 2002. Both headlamps utilize the latest lighting technology - LEDs. What distinguishes the Septor
from the Trident is that it is equipped with seven high-intensity LEDs, as opposed to the Trident's three LEDs and separate xenon bulb.

"The Streamlight Septor, delivering an incomparable beam of light, gives industrial professionals the flexibility to adjust the flashlight's output. The single-LED mode provides short distance illumination. For medium distance lighting, the three-LED mode is recommended, and for high-intensity, long-range lighting, users will appreciate the power of all seven LEDs," Penney said. "And, what makes the Septor even more valuable is that each of the seven LEDs lasts up to 100,000 hours, which means they will likely never have to be replaced."

Like the Trident, the Septor has a 90-degree tilting head that enables users to zero in on a target. The tilting head is easily adjusted and can be positioned at several angles. "It's great for industrial safety and MRO professionals who need varying degrees of light for various applications," Penney added.

The Septor's water-resistant thermoplastic construction, along with its rubber-shielded bezel and unbreakable polycarbonate lens, makes it a very durable product. "The Septor is made to withstand all the elements, from extreme heat to pouring rain,
while preserving its effectiveness and functionality," said Penney.

The Septor operates on three AAA alkaline batteries, and can run for up to 120 hours in single LED mode. It weighs only 5 ounces, and is less 3 inches wide, making it comfortable to wear around the head and easy to store. The Septor comes with a fully-
adjustable elastic head strap. A rubber head strap is available separately for hard hats.

The Septor retails for $49.95 (with batteries) and is backed by a one-year warranty (excludes batteries).