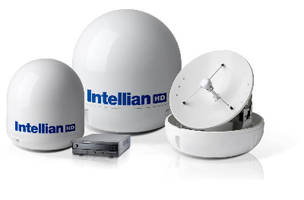 Irvine, Calif. - Intellian Technologies, the world's technological leader in marine satellite antennas, announced today the latest addition to its revolutionary line of antennas, the d-Series High Definition (HD) TV systems. Incorporating a radically new, patent-pending design, the d-Series are the only marine-grade antennas that can receive signals from all DIRECTV satellites. With a small size and very light weight, the d4 and d6 d-Series antennas are suitable for smaller boats through large yacht, and can be installed on bimini/buggy top frames or even small hard/arch tops. The Intellian d-Series HDTV systems are the only choice for DIRECTV subscribers who want to see all available HDTV and sports package programming while underway on the water.

"The Intellian d-Series is a revolutionary new solution designed to address issues boaters have had viewing DIRECTV HDTV programming," said Eric Sung, president and CEO of Intellian Technologies. "Prior to its introduction, boaters were limited to a dual antenna Intellian solution or a third-party, repurposed home satellite product that weighs over 200 pounds. Our elegant, rugged and marinized d4 and d6 antennas are the ideal choice for DIRECTV subscribers looking to maximize their on-the-water viewing pleasure."

The d-Series features automatic satellite switching and a plug-and-play interface that allows connection to as many as six satellite receivers. FCC and CE approved, the d-Series, like all Intellian marine TV antenna solutions, meets the company's extremely high environmental testing standards. With a simple, elegant design and compact size, the perfectly balanced d-Series platform also minimizes components and cabling, thus increasing reliability, and making installation and maintenance easier than other solutions on the market. The d4 has a 17.7-inch antenna dish, weighs 25.5 pounds and is housed in a 21.3-inch high dome with a 19.7-inch diameter. The d6 has a 23.6-inch dish, weighs 44 pounds and has a 28.3- by 27.5-inch dome. The Intellian d-Series antenna systems are designed to operate in +/- 25-degree rolls and +/- 15-degree pitches at 45-degrees per second. Operating as low as negative 5 to 130-degrees Fahrenheit, the Intellian d-Series HD antennas are IPx6 rated, shock and vibration proof, and protected by a 2-year parts and 1-year labor limited warranty.

The Intellian d4 and d6 d-Series marine satellite HDTV antennas have a suggested retail price of US $5,995 and US $7,995, respectively, and will be available for purchase the second week of July, 2009 from authorized Intellian Technologies dealers and distributors throughout the United States. For more information on the d-Series antenna systems visit www.intelliantech.com/dseries. For more information about Intellian Technologies and its entire product line, compatible satellite networks, or international pricing and distribution please visit www.intelliantech.com or call (949) 916-4411.