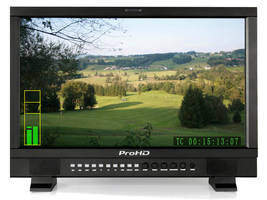 All DT-X92 models will be available in July with the following MSRPs:

“This is a major upgrade to our most popular line of LCD monitors,” said Lon Mass, vice president of sales and marketing. “Our affordable ProHD monitors offer incredible picture quality as well as extensive features and connectivity options for professional monitoring on location or in the studio.”