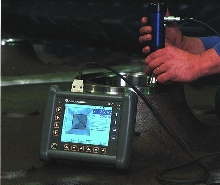 The TIV method (Through Indenter Viewing) is the basis of a newly designed portable hardness tester that can be used to test a variety of metals with the potential to test some non-metallic materials. Unlike other portable hardness methods, the TIV method is unaffected by the part's mass and thickness for repeatable results even on thin and lightweight components. The hardness value is quickly displayed and conversion tables stored in the instrument allow you to display the measured value according to different hardness scales.

The TIV method is based on the Vickers principle of hardness testing. The unique probe design uses a traditional pyramid shaped Vickers diamond that is pressed into the material under a defined test load and a CCD-camera to monitor the event and create a "live image" on the instrument's LCD. The diagonals of the indentation are automatically measured and the hardness value instantaneously displayed. Viewing through the diamond provides an immediate verification and evaluation of the quality of the indentation to assure the reliability of the measured value.

An ergonomic housing and probe have the combined weight of approximately 3 lbs. (including batteries), allowing for easy handling and transport. Tests can be carried out everywhere and in any direction. The TIV is operated by means of the graphic user interface displayed on the color LCD screen and instrument functions are carried out with the simple touch of the display's touch screen or pressing a key on the instruments keypad. The TIV has functions for storage, documentation, and on-screen analysis of test data. The test series can be displayed on the LCD as a chart, histogram or with statistical information. Data can be outputted via the RS232 port.