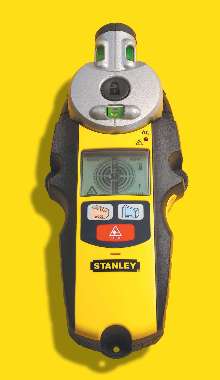 New 3-in-1 tool works as a level, stud finder and laser layout tool

SUMMARY: Stanley combines the accuracy and convenience of laser layout technology with a built-in stud finder to create the Stanley® IntelliLaser(TM) Pro Laser Line Level/Stud Finder. The IntelliLaser(TM) is a versatile 3-in-1 tool that functions as a level, stud finder and a vertical and horizontal layout tool. Adding to the tool's versatility is a 20-ft. laser layout line and a 180° pivoting laser plane with level and plumb vials. The stud detector recognizes studs and joists through up to 3/4" of drywall and other common wall materials and has continuous live wire detection up to ¾" depth. An LCD display with new patent pending graphics visually informs the user of the proximity of the stud. Two self-contained hang pins allow the user to mount the unit to the work surface.

When used as a laser layout tool, the IntelliLaseR(TM) features a push button activated laser that pivots every 45° up to 180° to provide accurate layout angles. The IntelliLaser(TM) is complete with level and plumb vials to help users perform a wide range of leveling, aligning and squaring applications faster and more conveniently than using a traditional level or chalk line. The tool has a high quality 20-ft. laser capable of handling any job site.

As a stud finder, the IntelliLaser(TM) detects studs and joists up to 1-½" of drywall and other common wall materials and has continuous live wire detection up to ¾ "depth. An LCD sensing and mode display features new patent pending graphics and visually informs the user of the proximity of the stud.
"Stanley's engineering and technology capabilities have developed a combination product that will assist everyone from the homeowner to the pro in a variety of applications," said Chris Harrison, Global Product Line Manager for Stanley Measuring and Layout Tools.

The suggested retail price for the Stanley® IntelliLaser(TM) Pro Laser Line Level/Stud Finder is $54.99. It is currently available at Target stores and will be available in early 2004 at all hardware stores and home centers wherever Stanley® products are sold.