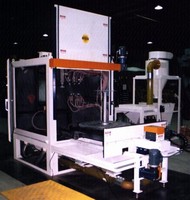 Model SP-10 is supplied with cyclone separator and media reclaimer that is lined with abrasion-resistant urethane rubber. Featuring 8 suction-feed blast guns mounted on swing-arm actuator, unit can process circular components up to 40 in. diameter. Blast chamber is 60 x 60 x 60 in. and has automatic sliding doors and motor-driven, 36 in. dia. turntable cart that rotates at controlled and adjustable speed during blasting cycle.

Guyson Corporation has designed and built an automated abrasive blast system to process circular components up to 40 inches in diameter. The Model SP-10 is claimed to be capable of producing a specified profile and uniform roughness over the entire target surface with a high degree of repeatability.

The 60 x 60 x 60-inch blast chamber of the SP-10 has an automatic sliding door and is equipped with rails and a transfer cart that rolls in and out of the finishing enclosure under power. A 36-inch diameter turntable on the cart is motor-driven to rotate at controlled and adjustable speed during the programmed automatic blasting cycle.

Eight suction-feed blast guns are mounted on a swing-arm actuator that provides accurate horizontal traversing motion that is synchronized with the rotation of the component. Each gun is secured on a telescoping bracket that enables nozzle angles and offsets to be adjusted. Programmed blasting and blow-off process routines for numerous different components, including table RPM, nozzle traverse stroke and speed, blast cycle and blow-off cycle duration and other parameters can be stored and recalled by the SP-10's powerful programmable logic controller (PLC).

Designed for use with harsh mineral grit abrasives, the SP-10 blast system is supplied with a cyclone separator and media reclaimer that is lined with abrasion-resistant urethane rubber. The reclaimer also has an in-line magnetic separator to remove any burrs or metal particles from the blast media. Electronic media level sensors linked to the PLC detect when the supply of grit is low, and the system automatically replenishes the media from a hopper dispenser without interruption of the blasting operations.

The interior of the blast cabinet and the rotary table have a bonded rubber lining to provide abrasion protection. A side-benefit of the lining is quieter operation. Catch-trays under the track extension collect blasting grit carried out from the finishing chamber, and it is pneumatically conveyed back to the media reclaimer by thick cast urethane ducting.