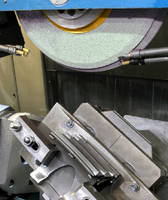 
Advance in wheel composition allows cooler grinding of aerospace superalloys and other materials, while maintaining productivity

Norton, from Saint-Gobain Abrasives, has launched a new generation of its Quantum grinding wheels consisting of readily self-sharpening ceramic grains in a vitreous bond of high strength and porosity, known as VET.

When grinding aerospace parts from nickel-based superalloys, which are tough, sticky to machine and have poor thermal conductivity, wheel porosity is vital to ensure that enough coolant reaches the point of cutting. Otherwise burning can occur, causing microcracking and thermal damage to the component.

For some years, it has been possible to manufacture highly porous vitreous grinding wheels in which aluminium oxide abrasive grains are held strongly. Such products have been used widely for creep-feed grinding of nickel, a process that involves a large contact area between component and wheel as well as heavy infeed forces.

Reciprocating grinding, on the other hand, is not so aggressive to the surface of the component, as it uses a small depth of cut combined with fast movement of the workpiece back and forth. However, until now this process also had its drawbacks, making it suitable mainly for small batch sizes and relatively low stock removal rates.

The reason was that the shallow cuts tended to prevent proper chip formation, rapidly wearing the abrasive grains. This in turn resulted in wheel glazing and a high level of friction, leading back to the problem of component burning and thermal damage. Moreover, the attendant increase in cutting force often caused detrimental chatter and vibration in machines of low rigidity, compromising accuracy.

These difficulties on reciprocating grinders have been overcome by Norton Quantum VET, regardless of whether the wheels are used on simple 2-axis machines or models employing fully interpolating 3- and 4-axis motions for producing complex profiled parts. Both bond composition and grain play a part in this success, raising throughput and making the process financially viable for production grinding of nickel alloys.

Norton's breakthrough has been to formulate wheels with a porous bond that is strong enough to hold ceramic grain securely in place. Until now, such grain has tended to be easily dislodged from an open matrix, wasting material and shortening the life of the consumable. As the bond material does not form a high proportion of wheel volume, free cutting results, while the high bond strength maintains mechanical integrity of the wheel at peripheral speeds up to 100 m/s.

Furthermore, as the profile of the wheel edge is maintained for longer due to the good abrasive retention and form-holding characteristics of the bond, more parts are produced before the wheel needs to be dressed. Production downtime is minimised, the life of the consumable is extended by between 33 and 100 per cent compared with competitive ceramic products, and the life of the dresser is also prolonged.

The ceramic grain itself also plays a crucial part and represents a big stride forward in technology. Unlike Norton's earlier seeded gel ceramic grains, which were hard and tough and would only microfracture under high grinding force, Norton Quantum grains are manufactured differently. Built-in fracture planes allow sub-micron particles to break off at lower mechanical pressure and expose new, sharp grain edges much more readily. This microstructure lends itself well to burn-free grinding of superalloys and other materials, even when water soluble coolant is used.

Tests at Saint-Gobain Abrasives’ research and development centre have shown that high speed rotation of a 300 mm diameter Norton Quantum VET wheel combined with a grinding machine table speed of 80 m/min and a stock removal rate of around 0.1 mm per pass resulted in Q' of up to 133 mm3/mm/s in nickel alloys, equivalent to the performance of creep-feed grinding. (This nomenclature means that 133 cubic millimetres of material are removed per second for every 1 mm of grinding wheel width.)

Cylindrical grinding of impeller shafts is another good application. In one turbocharger factory, Norton Quantum VET wheels on beta test were shown to last three times longer than the previous consumables, largely due to extended time between dressing and a reduction in the amount dressed off. In addition to achieving more parts per wheel and prolonging dress tool life, higher stock removal rates significantly increased productivity.

Similar benefits have been recorded when angle-approach grinding flange and post ends on crankshafts, with the additional benefits of better surface finish and shorter cycle times.

In other areas, wheels comprising similar grain retained in an organic rather than a vitreous bond are set to find uses across industry, predominantly for machining steel. Roll grinding, double disc grinding of con rods and spring grinding are all proving more productive with this wheel formulation.

Norton Quantum products are produced in Saint-Gobain Abrasives’ network of world-class plants, manufacturing location being determined according to the specialist manufacturing expertise of each plant. Various mixes of abrasive and bond, identified by different product colours, optimise the properties of the wheels for their intended use.

The products are friable and free cutting on low force applications, but tough and durable on high force applications, allowing them to be deployed across a wide spectrum of materials ranging from cast iron, steels and stainless steels to cobalt chrome, hardened tool steels, titanium and high nickel alloys.

All Saint-Gobain Abrasives’ grinding wheels are designed and produced to stringent quality standards to guarantee operator safety. They are tested and certified to EU standard EN12413, which stipulates safety requirements for bonded abrasive products. Saint-Gobain Abrasives is an active member of FEPA, the Federation of European Producers of Abrasives and of oSa, the worldwide Organisation for the Safety of Abrasives.

To help manufacturers maintain competitive advantage, Saint-Gobain Abrasives offers a free Process Solutions Program (PSP). An engineer visits a customer's site to analyse grinding operations in their entirety, with a view to making improvements that will increase productivity, improve quality and reduce costs. A safety audit also forms part of the overall assessment.