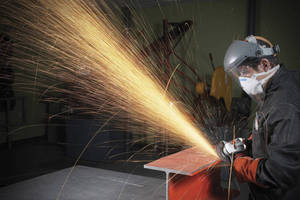 “Today’s demanding fabrication environments require the utmost in power when it comes to grinding wheel technology and Walter has developed the new XCAVATOR to deliver this. Grinding represents a major part of shop costs and XCAVATOR stands tall as a heavy-duty grinding wheel that helps save time, save money and is built to last,” said Jean-François Dubois, Director of Marketing, Canada, Walter Surface Technologies.

Created for use with powerful grinding machines, XCAVATOR performs removes over 30% more grams per minute compared to other Ultra High Removal wheels, while at the same time absorbing vibrations, allowing this durable wheel to cost-effectively outlast all other grinding wheels in this category. Free of materials such as iron, sulfur and chlorine, XCAVATOR is virtually guaranteed not to contaminate surfaces such as stainless steel.