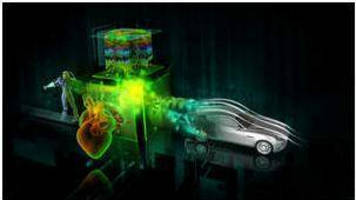 LOS ANGELES, CA - SIGRRAPH 2010 -- NVIDIA (Booth #717) today launched the era of the 'computational visualization workstation' for designers, engineers, researchers and animators by introducing its Quadro® graphics processing units (GPUs) based on NVIDIA® Fermi architecture, and by also introducing the new NVIDIA 3D Vision(TM) Pro solution. The new Quadro GPUs deliver performance that is up to five times faster for 3D applications and up to eight times faster for computational simulation(1), shattering previous benchmarks.

The NVIDIA Quadro Plex 7000 array, and Quadro 6000, Quadro 5000 and Quadro 4000 GPUs feature the new NVIDIA® Scalable Geometry Engines and leverage NVIDIA Application Acceleration Engines (AXE) to enable the world's fastest performance across a broad range of CAD, DCC and visualization applications(2). Rated at an unheard of 1.3 billion triangles per second in raw performance(3), the Quadro 6000 enables users to interactively work with models and scenes that are five times more complex than ever before.

"For over a decade Quadro has been the choice of professionals around the world. We've also built Engines like AXE to enable the creation of next-gen applications," said Jeff Brown, general manager, Professional Solutions Group, NVIDIA. "When you couple these technologies with our Fermi architecture, the result is a new Quadro family that's exponentially better than anything the market has ever seen."

The new Quadro GPUs are built on industry standards, including OpenGL 4.1, DirectX 11, DirectCompute and OpenCL. In addition, Quadro leverages technologies that are unique to NVIDIA -- such as the company's portfolio of Application Acceleration Engines (AXE) and NVIDIA CUDA(TM) parallel processing architecture. The result is that software developers are able to create and deliver the next-generation of professional applications that incorporate compute-intensive tasks. Among these tasks are ray tracing, physics simulation, computational fluid dynamics and real-time video effects processing.

"NVIDIA isn't just working on building better graphics hardware, but the software tools needed to drive the needed advancements that are now changing the industry," said Rob Enderle, principal analyst, Enderle Group. "NVIDIA was committed to building tool after tool this past decade in order to drive the market where they needed it to go, and their efforts are paying off."

Widespread Adoption
Workstation OEMs and System Integrators, including Dell, HP, Lenovo, BOXX Technologies and NextComputing, are among those that are offering the newest Quadro solutions. Quadro products are also available from value added resellers through master distributors PNY Technologies in North America and Europe, Leadtek in Asia Pacific, and ELSA in Japan.

About NVIDIA
NVIDIA (NASDAQ: NVDA) awakened the world to the power of computer graphics when it invented the GPU in 1999. Since then, it has consistently set new standards in visual computing with breathtaking, interactive graphics available on devices ranging from tablets and portable media players to notebooks and workstations. NVIDIA's expertise in programmable GPUs has led to breakthroughs in parallel processing which make supercomputing inexpensive and widely accessible. The company holds more than 1,100 U.S. patents, including ones covering designs and insights which are fundamental to modern computing. For more information, see www.nvidia.com.

© 2010 NVIDIA Corporation. All rights reserved. NVIDIA, the NVIDIA logo, Quadro, CUDA, and 3D Vision, are trademarks and/or registered trademarks of NVIDIA Corporation in the U.S. and other countries. Other company and product names may be trademarks of the respective companies with which they are associated. Features, pricing, availability, and specifications are subject to change without notice.