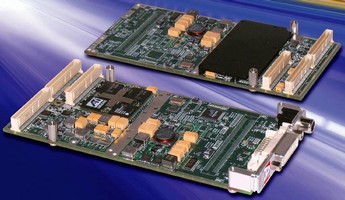 The dual DVI outputs of the M591 are capable of independent resolutions of up to 1600 x 1200 pixels at 75 Hz with 32 bits per pixel and reaches 2048 x 1536 pixels at 85 Hz with data rates up to 122 Mpps (million pixels per second). TV output supports NTSC, PAL, RS170A and CCIR formats in addition to S-video (Y/C) signal formats, both interlaced and non-interlaced.

To minimize inherently unreliable cabling detrimental to high reliability applications, video DVI and TV outputs are routed through the PMC's P4 connector to accommodate rear panel I/O for the conduction-cooled PMC version. For the air-cooled version, the video I/O is routed via the PMC front panel, which has connectors for each of these signals.

The board's on-chip, 64 MB DDR frame buffer operates at 200 MHz and its software drivers package supports all onboard capabilities such as OpenGL, which includes INTEGRITY and VxWorks RTOS support, as well as standard VGA and X11.

Having pioneered the development of true military VME products for use in mainstream COTS applications, Aitech utilizes its broad base of off-the-shelf products and technologies to develop customer-specific solutions, deliver superior cost-performance and reliability, and expedite time to market. Applications for its products range from mission processors, fire control and mission control subsystems for ground vehicles as well as surface and subsurface naval platforms to tactical and strategic fixed- and rotary-wing aircraft, and low- to high-earth orbit and deep space vehicles.
Share