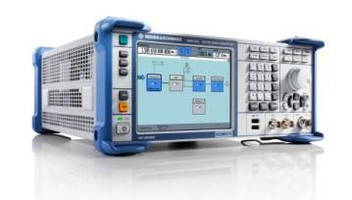 
Rohde & Schwarz designed its GNSS simulator for the R&S SMBV100A with a focus on production testing of GNSS receivers. The fast GNSS production tester supports the GPS, Glonass, BeiDou and Galileo satellite systems and includes a wealth of additional test functions for characterizing GNSS chipsets and modules.

Munich — Rohde & Schwarz now offers a new, speed-optimized production tester – the R&S SMBV100A vector signal generator equipped with the R&S SMBV-P101 package. During production testing of modules and receivers for satellite-based communications, the basic GNSS signal reception and the connection between the antenna and GNSS chipset need to be checked.

The GNSS production tester simulates separate satellites for the GPS, Glonass, BeiDou and Galileo navigation standards in the L1/E1 band specifically for these production tests.

The four satellites can be activated individually, each with a high dynamic range of 34 dB. Level changes can be made on the fly without interrupting the signal, enabling users to simultaneously perform independent sensitivity tests for each navigation system. The 1 pps or 10 pps GNSS marker allows exact time synchronization between the tester and the DUT. Pure, level-stable CW signals can also be generated to calibrate the test setup or to simulate interferers.

The R&S SMBV-P101 option additionally offers test functions for efficient characterization of GNSS chipsets. As a result, a receiver's ability to handle high movement dynamics can be verified quickly and cost-effectively. To do this, users can access both predefined and user-defined Doppler profiles, from which the R&S SMBV100A automatically generates the appropriate satellite signal.

The Rohde & Schwarz electronics group offers innovative solutions in the following business fields: test and measurement, broadcast and media, secure communications, cybersecurity, radiomonitoring and radiolocation. Founded more than 80 years ago, this independent company has an extensive sales and service network and is present in more than 70 countries. The electronics group is among the world market leaders in its established business fields. On June 30, 2014, Rohde & Schwarz had approximately 9800 employees. It achieved a net revenue of EUR 1.75 billion in the 2013/2014 fiscal year (July to June). The company is headquartered in Munich, Germany. It also has regional headquarters in Singapore and Columbia, Maryland, USA, to manage its operations in these regions.

All press releases, including photos for downloading, are available on the Internet at http://www.press.rohdeschwarz.com.
Share