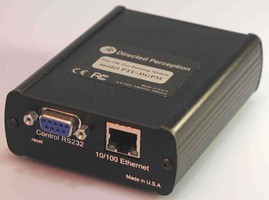 The unit is calibrated using a simple landmark process. Once installed, applications can send latitude/longitude/altitude coordinates to the unit and the Geo-Pointing Module will automatically aim the attached pan-tilt unit (with camera, laser, antenna, or other payload) at the specified location. Commands can be broadcast to multiple units to coordinate aiming multiple sensors at a single location automatically.

The Geo-Pointing Module greatly simplifies systems integration by allowing applications and other system devices to command the sensor aiming simply by sending geo-coordinates. This type of capability has been known previously only in high-end military targeting systems. The Geo-Pointing Module brings this functionality to low-cost surveillance and communications systems in a small, embedded package that operates with any Directed Perception pan-tilt model.

Applications can also query the unit for the latitude/longitude at which the unit is currently pointing, simplifying integration with map-based and geo-aware user interfaces and control applications. Multisensor surveillance systems can more easily be integrated to provide advanced functionality. For example, ground radar systems can send target positions directly to pan-tilt cameras equipped with a Geo-Pointing Module to immediately train cameras on detected targets.

Price and Availability
The PTU-DGPM is available now. U.S. pricing is $500 (Quantity 1) for standard configuration.

About Directed Perception, Inc.
Directed Perception is a leading manufacturer of innovative devices and software for the intelligent control and positioning of sensors including video cameras, IR sensors, laser rangers, microwave antennas, thermo-imaging sensors, and more. The Company's products are designed with precision, ruggedness, and low-cost to support demanding applications, such as tracking, in a broad range of OEM and end-user applications. Directed Perception's flagship miniature computer-controlled pan-tilt tracking mount was one of the first of its kind and has been sold to OEMs and end-users worldwide since 1992. The Company's patented products are used in a wide range of industries including Security & Surveillance, Industrial Automation, Robotics, Communications, Military/Aerospace, Law Enforcement, Education, and R&D. Directed Perception customers include industry-leading companies worldwide in aerospace, defense, security & surveillance, robotics and industrial automation. Directed Perception sells its products direct and through distributors and partners worldwide. Directed Perception is privately held and headquartered in Burlingame, in Northern California.
Share