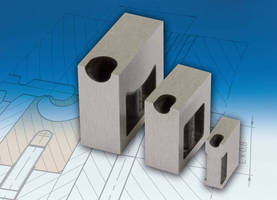 Designed for tunnel-type (submarine) gates, Z10650 gating inserts are provided with added stock, making them individually contourable, which allows direct adaptation to contours of mold. They leave no evidence of gate on upper side of molded part, and enable clean separation of sprue. Produced by MIM process and made of wear-resistant hot-work steel 1.3343, inserts are available in three sizes.

The gating inserts are provided with an added stock and thus individually contourable, allowing direct adaptation to the contours of the mould.
This results in new possibilities for the individual design of the moulded part. No evidence of the gate can be seen on the upper side of the part as a result of improved gate quality.

The inserts are produced by the MIM process and made of highly wear-resistant hot-work steel 1.3343. They are available in three sizes. The mould maker saves a considerable amount of time by using the gating inserts and can rely on clean separation of the sprue.