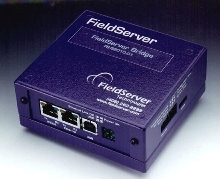 FS-B2010-01 protocol translator converts Modbus RTU to Modbus TCP, allowing users to link Modbus devices to Ethernet. Any information available through communications port can be translated into alternative protocol. Bridge can act as either client, server, or both.

The FS-2010-01 FieldServer Gateway is a protocol translator to convert Modbus RTU to Modbus TCP, making it easy to link Modbus devices to Ethernet. With the FieldServer Bridge a device using Modbus can be accessible plantwide. The Gateway is a true protocol translator and not simply a tunneling device, thus only one Gateway is needed to link a Modbus RTU device to Ethernet. This communication is fast and complete, any information available through the communications port can be translated into the alternative protocol. The Bridge can act as either a client or server, or in some situations can act as both.

In addition to Modbus TCP an extensive protocol driver library is available from FieldServer Technologies to meet other interoperability challenges. No other manufacturer has as broad a
library. Drivers for fire alarm panels, building control systems, process control devices, and other systems are available for the FieldServers.
Share