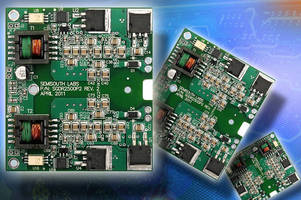 SemiSouth Laboratories, Inc., the leading manufacturer of silicon carbide (SiC) transistor technology for high-power, high-efficiency, harsh-environment power management and conversion applications, has announced the SGDR2500P2, a dual-output, two-stage, opto-isolated gate driver board intended for use with power electronics modules that incorporate SemiSouth's vertical-trench junction field-effect transistors (VJFETs) as the primary switches. The board provides electrically isolated high-side and low-side outputs with peak current levels of +20/-10 A, enabling fast switching speeds and yielding record-low switching energy losses. The SGDR2500P2 is optimized for the high-speed, hard switching of specific power modules such as Microsemi's 1200 V, 100 A half-bridge, APTJC120AM13VCT1AG, but can also be used as a time-saving evaluation board for projects in the development or qualification stage.

The SGDR2500P2 self-generates isolated ±15 V supply voltages, eliminating the need for multiple power supplies. The board's maximum switching frequency is 100 kHz, enabling the user to leverage the high-frequency capability of SiC technology and reduce bulky, costly magnetic components. Moreover, the duty cycle can be adjusted from 0% to 100%, increasing versatility and making the board suitable for a variety of applications.

About SemiSouth Laboratories, Inc.
SemiSouth, a privately owned corporation with its main offices and foundry in Starkville, Mississippi, (USA), focuses on silicon carbide (SiC) power devices and electronics, targeting applications such as: solar inverters; power conversion in computing and network power supplies; variable-speed drives for industrial motors and hybrid electric vehicles; and products used in high-power, harsh-environment military and aerospace environments. The company was formed in 2000, has sold products globally through direct sales or distributors since 2005, and received a major growth investment from Power Integrations (NASDAQ: POWI) in 2010. It introduced the world's first commercial, cost-effective normally-off SiC JFETs in 2008, which have enabled world-record energy efficiencies for its customer's products. More information is available at www.semisouth.com.