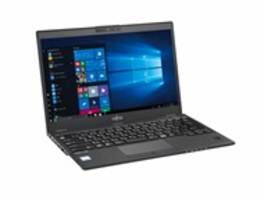 Expanding lineup of devices optimized for mobility and workstyle transformation

TOKYO, May 8, 2019 - (JCN Newswire) - Fujitsu Limited and Fujitsu Client Computing Limited today announced the launch of four Fujitsu Notebook LIFEBOOK models from two product series and three Fujitsu Tablet ARROWS Tab models of Windows tablets. The new notebooks and tablets, made by Fujitsu Client Computing, are available for purchase in Japan from today and include the latest CPUs and other innovative features. The latest new offering from the thin and light-weight LIFEBOOK U series, the LIFEBOOK U939X/A, is the world's lightest model as 13.3-inch slim convertible notebook with an internally stored stylus pen(1). Also newly available is the ultra-slim mobile notebook, LIFEBOOK U939/A, which is approximately 20 grams lighter than its predecessor(2). Going forward, the Fujitsu Group will continue to support customers' workstyle transformations with further additions to its lineup of devices excelling in mobility.

Main Features of the New Products

1. Slim convertible notebook LIFEBOOK U939X/A can be used in various configurations, according to the manner of use

At just 16.9 mm thick, the LIFEBOOK U939X/A, the world's lightest 13.3-inch, slim convertible notebook with an integrated stylus pen, weighs in at 877 grams(3), providing a higher degree of mobility. The notebook can be used in the form suited to a given work situation, such as notebook mode when keyboard input is required for writing e-mails or creating documents, or tablet mode in which the display is rotated 360 degrees for viewing webpages or showing a customer a presentation. Ease of use has also been improved, with a rear camera built into the keyboard surface so that in tablet mode the user can take photos while looking at the screen, as with a smartphone, and with the addition of a dedicated button that activates Windows 10's "Quick Note Taking" pen function, enabling pen input immediately upon pressing the button.

The 13.3-inch display, ultra-slim mobile notebook LIFEBOOK U939/A, optimized for mobile use, weighs in at 777 grams(4), which is approximately 20 grams lighter than its predecessor, due to the thorough application of light-weight materials. The model supports mobile work outside the office, with the availability of a custom-made privacy film to prevent other people from spying on screen contents, and other features. Both models in the U series support the newest technologies, coming equipped with the latest Intel 8th generation CPU and a Thunderbolt 3 port, capable of transmission speeds up to 40 Gb/s.

Devices equipped with the latest Intel 8th generation CPU are newly available for the three 13.3-inch ARROWS Tab models of Windows tablet from Q series, and the two LIFEBOOK models from A series, a 15.6-inch notebook.