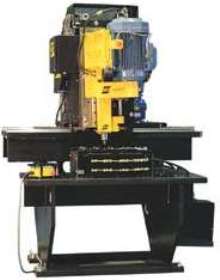 A major development in the field of Friction Stir Welding (the LEGIO(TM) modular FSW machines). ESAB has been the world's leading developer of FSW equipment since the process was first commercialised in 1992. With the launch of the LEGIO(TM) modular friction stir welding (FSW) machine concept, ESAB is making the FSW process affordable to a much wider industrial base. Use of FSW has, until now, demanded substantial investment in a custom-engineered machine. By contrast, a LEGIO(TM) machine is built from standard modules capable of satisfying most applications. The system is capable of welding materials from 1.2 mm thickness to 65 mm thickness from one side, whilst the control system has been developed specifically to handle the FSW process. As the LEGIO(TM)'s larger predecessor, a large number of SuperStir(TM) machines are also now in service worldwide. From this, the LEGIO(TM) FSW machine concept retains the same level of functionality but its modular construction allows faster delivery at significantly lower cost. In essence, the customer can specify a machine by its working area, the bed configuration, the clamping arrangement, and the number of heads. Several options are also available to satisfy other application requirements, The relatively modest cost of LEGIO(TM) machines will allow fabricators to consider FSW for small batches of products. Industries likely to benefit from the equipment include automotive, aerospace, marine, architectural, construction, and general engineering. The potential FSW market is very large as the process is extremely versatile and requires no special surface preparation. As well as welding two components of the same grade of aluminium, the FSW process can join dissimilar alloys or even join two completely different metals. In many cases FSW can be used to join materials that cannot be welded by any other means. For further information please contact: Jeff Defalco or Joe Blackmon ESAB Welding & Cutting Systems 411 S. Ebenezer Road Florence, SC 29501-0545 Tel: +1-(843)-664-4394 Toll Free: +1-800-ESAB-123 Fax: +1-(843)-664-4403 Email: jdefalco@esab.com